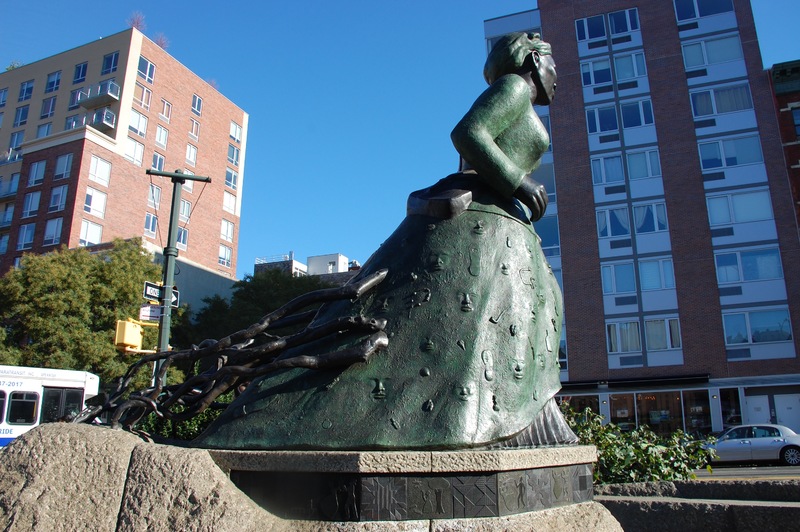 In discussing her visual strategies for the memorial, Alison Saar stated, “Since I’m not exactly a representational artist, I worried about how to present Tubman. There are only a few known images of her from when she was in her ‘70s or ‘80s. At one point, someone on the arts committee encouraged me to ‘do what you need to do; don’t compromise on your image.’ That was nice: A lot of times it’s the other way around. In the end, [Tubman] was a mixture of how I envisioned her (within my own style) and how she might’ve actually looked like.”[1]

In order to derive a historical sense of Harriett Tubman as a person, Saar conducted extensive research, having learned about Tubman as a child in the 1960s but feeling that her knowledge of the freedom fighter was superficial: “What I wanted to do was depict outwardly her inward spirit of compassion, and her fearlessness. The piece started taking on this image of a locomotive–this unstoppable locomotive–because despite all these efforts and bounties on her, she managed to continue her work. Even beyond the Civil War she continued to do other things. That’s sort of where the train-like image of her petticoat came from, wanting to talk about that fierce, relentless spirit that she had.”[2] 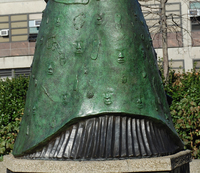 Without a doubt, Saar based her conception of Tubman on the 1869 frontispiece from Sarah H. Bradford’s Scenes in the Life of Harriet Tubman. Saar incorporated the core visual elements of the nineteenth-century wood engraving except for the rifled musket. She dressed Tubman in a Union issued overcoat and haversack, and a skirt with a pleated petticoat.

Saar also modeled Tubman wearing a simple head cloth, much like the wraps in her photographic images. Maintaining the solemnity of Tubman’s facial expression from the engraving, Saar also based Tubman’s immobile face without pupils in her eyes on the ancient Roman portrait bust tradition, connecting her monument to a long history of three-dimensional portraiture.

In Swing Low, the verdigris patina of Tubman’s coat and skirt next to the slate black patina of her skin are a visually striking contrast. The thirteen feet by twelve feet bronze statue embodies Tubman as a “locomotive coming on full steam.” In Saar’s conception, Tubman’s petticoat becomes the pilot (also known as a cowcatcher or cattle guard) of a train, the device mounted at the front of a locomotive to deflect obstacles on the track that might otherwise derail the train.[3]

Symbolically, Tubman emerges from the woods (the planted oak trees that frame the site) besides a river (the reconfigured subway gratings). “Trailing behind Tubman’s skirt are roots which symbolize the pulling up of roots by the slaves and all they had to leave behind and Tubman’s uprooting of the slavery system itself.”[4]

Stylized portraits of “anonymous passengers” of the Underground Railroad adorn Tubman’s skirt. “From the surface of her full skirt, small mask-like faces press through the folds of the fabric, representing the more than 300 people she led to freedom. The skirt is also embellished with worn shoe soles, manacles and locks, cowry shells, medicine bottles and other items carried by the slaves to the North.”[5] Although we now know that Tubman did not lead 300 people to freedom, the faces serve to remind us of the dozens of family members and friends that Tubman guided.

Around the granite ‘outcropping’ of the monument are bronze tiles depicting events in Tubman’s life that are in an appliqué style (a traditional quilting method) and geometric ‘pieced’ quilted blocks. Saar has said that: “The geometric tiles depict traditional patterns of the Freedom Quilts, believed by some to have been used as signals along the Underground Railroad.”[6] At the center, we see a traditional eight-pointed star quilt block, sometimes called a sawtooth star. To the left, Saar cast an appliqué block of Tubman with a sack, traveling at night under a crescent moon and following Polaris. To the right, the artist created a narrative image of Tubman leading a family through the woods to freedom, again the North Star guides her.

In case one was unsure of the meaning of the sculpture, the NY Parks added a descriptive plaque to the installation. The plaque provides biographical information on Tubman, offers an interpretation of the sculpture, and describes the environment created for the monument.