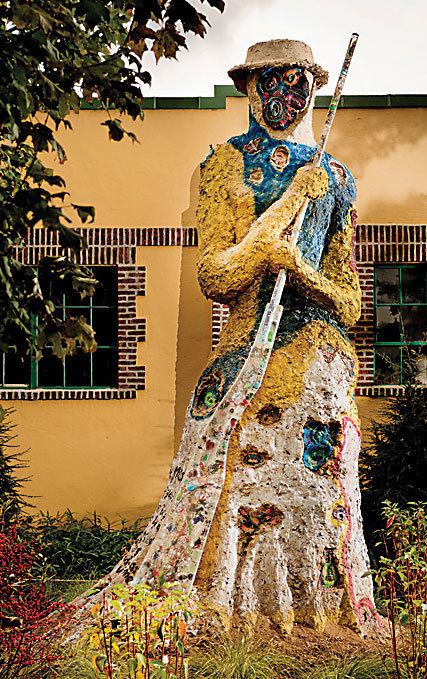 Joyce J. Scott’s Graffiti Harriet (2017) was installed at Grounds for Sculpture, Hamilton Township, New Jersey, from October 20, 2017 to April 1, 2018. The artist intended the fifteen-foot statue of soil, clay, straw, beads and found objects to disappear (dissolve under the winter and spring weather conditions) over the course of the exhibition. All that remained was the gun and beads. Source: Bryan Anselm for the New York Times, January 4, 2018

“I think slavery is the next thing to hell. If a person would send another into bondage, he would, it appears to me, be bad enough to send him into hell, if he could.”

Araminta “Minty” Ross was born into slavery in 1822 on the Eastern Shore of Maryland, to Ben Ross and Harriet “Rit” Green. The middle child, Minty had four older siblings (Linah, Mariah Ritty, Soph, and Robert) and four younger siblings (Ben, Rachel, Henry, and Moses). Owned by Mary Pattison Brodess and Anthony Thompson, Araminta was born on the Thompson plantation along the Blackwater River in Dorchester County, where both of her parents were enslaved. Although Ben Ross would be manumitted in 1840 at the death of Anthony Thompson, his children remained slaves due to Rit’s enslaved status. In 1823-24, Mary’s son Edward Brodess moved to his own property near Bucktown, Maryland, bringing with him Rit and the Ross children, separating them from their father.[1]

From the age of six until she was twenty-seven (1828-1849), Edward Brodess hired out Minty as a weaver, domestic, field hand, dockworker, and lumberjack. Around the age of twelve, a plantation overseer nearly killed Minty when he threw a two-pound iron weight at her head, missing his intended target of another enslaved person. The effects of the blow to the head disabled Minty for the rest of her life.[2]

Historian Kate Clifford Larson suggests that the adult Harriet Tubman likely suffered from temporal lobe epilepsy (TLE) due to the injury. She writes: “the bright lights, colorful auras, disembodied voices, states of tremendous anxiety and fear alternating with exceptional hyperactivity and fearlessness, and dreamlike trances while appearing to be conscious, followed by the episodes of overwhelming and crippling fatigue that Tubman experienced, are classic symptoms of temporal lobe epilepsy.”[3] Despite bouts of illness, visions, and intense headaches due to the head injury, Minty continued to labor within the dehumanizing system of slavery on Maryland’s Eastern Shore.