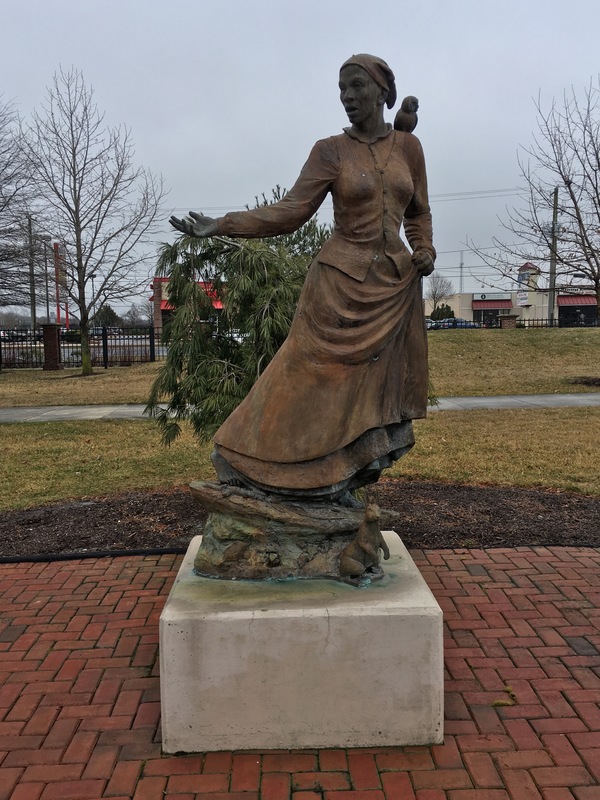 This statue of Harriet Tubman is located at Salisbury University in Salisbury, Maryland. Tubman faces west and gestures to the North. The artist, James K. Hill, suggested that Tubman is in action, moving along the Underground Railroad, aided by the wise owl and sure-footed hare. Source: Photograph by Renée Ater.

A wood engraving of twenty-eight fugitives escaping from the Eastern Shore of Maryland. The image was originally published in William Still’s The Underground Railroad: a record of facts, authentic narratives, letters, &c. (1872). Source: Library of Congress, LCCN Permalink.

Daguerreotype of John Brown from May 1859. Brown and fourteen men occupied the Armory at Harper’s Ferry from October 16-18, 1859. Source: Library of Congress, LCCN Permalink.

“I had crossed the line. I was free; but there was no one to welcome me to the land of freedom. I was a stranger in a strange land; and my home, after all, was down in Maryland; because my father, my mother, my brothers, and sisters, and friends were there. But I was free, and they should be free.”

In 1844 Araminta Ross married freedman John Tubman and took the name Harriet. Her marriage to a free person was not unusual on the Eastern Shore. Free blacks and enslaved persons lived side by side in a complicated society “divided against itself,” in the words of Barbara Jeanne Fields.[1] By 1850, 4,282 enslaved and 3,848 free black persons resided in Dorchester County, Maryland, alongside 10,747 whites, with African Americans making up 43% of the population.[2] Kate Clifford Larson notes that a “dense community of slave and free black families, brought together by virtue of their work patterns and the social interactions of their white masters and employers” formed the social world of Harriet Tubman.[3]

At the time of her marriage, Edward Brodess sold three of Tubman’s sisters to the lower South—Linah, Mariah Ritty, and Soph. Brodess’s inhumane action had a devastating impact on Tubman. When he died in March 1849, Tubman planned her escape on hearing rumors that she and her remaining siblings might be sold to settle his outstanding debts. In the fall of 1849, she ran away twice and succeeded on her second attempt in escaping to Philadelphia. With plans to return for her husband, Tubman left John behind.[4]

Tubman became a conductor on the Underground Railroad in 1850, working tirelessly for a decade to free her family and friends in Maryland. She settled many of her family members and friends in St. Catharines, Canada West (present-day Ontario) and its environs. In 1859, Tubman and some members of her family moved to Auburn, New York, where she purchased a home and land from William H. Seward, former governor of New York and President Abraham Lincoln’s future secretary of state.[5]

During this active period, Tubman also met with John Brown about his planned raid on Harper’s Ferry in West Virginia. Brown was an abolitionist who believed that he was predestined to end slavery. Fergus Bordewich has noted that “Political events of the 1850s turned Brown from a fierce, if essentially garden-variety, abolitionist into a man willing to take up arms, even die, for his cause. The Fugitive Slave Law of 1850, which imposed draconian penalties on anyone caught helping a runaway and required all citizens to cooperate in the capture of fugitive slaves, enraged Brown and other abolitionists.” A great admirer of Brown’s, Tubman solicited support for him, but did not participate in his infamous raid.[6]

[5]See Beneath the Underground: The Flight to Freedom and Communities in Antebellum Maryland, An Archive of Maryland Electronic Publication, accessed May 21, 2018, http://slavery.msa.maryland.gov/html/flight/sugrr.html and T. Stephen Whitman, Challenging Slavery in the Chesapeake: Black and White Resistance to Human Bondage, 1775-1865 (Baltimore: Maryland Historical Society, 2007), 164-201.