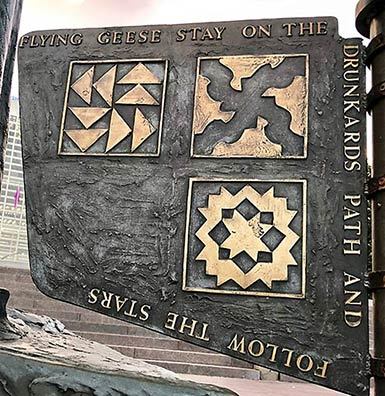 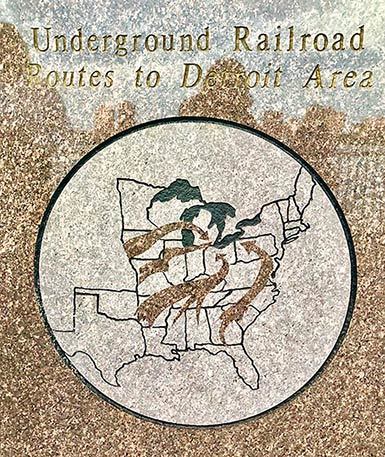 Two gateway pillars (approximately fifteen feet tall), topped with candles symbolizing the “Flame of Freedom,” flank Ed Dwight's memorial to the Underground Railroad. The work, which overlooks the Detroit River, includes a ten-by-twelve-foot sculptural group: eight escaping slaves and an Underground Railroad Conductor, who gazes and points towards Canada. Dwight modeled the conductor after George DeBaptiste, a freeman from Virginia who migrated to Detroit in 1846. DeBaptiste was an active abolitionist, Underground Railroad operative, and leader of the Vigilant Committee of Detroit, a watchdog and legal advocacy group for the black community.


Panels with engravings of quilt squares appear on either side of the figural group. Here, Dwight appears to be referencing one of the most popular myths surrounding the Underground Railroad: “Freedom Quilts,” objects said to have been created by slaves and hung in windows as coded maps or guideposts for fugitives slaves on the run. The base of the sculpture is embellished with engravings of lanterns resting in window sills.

As the historian, Nora Faires has observed of the two gateway pillars: “High on the western pillar is a carving of a “slave tag,” dated 1833. Masters in Charleston, South Carolina, were legally required to purchase such tags or badges for slaves to wear, both as a revenue-raising measure and to keep track of those in the city’s slave population who hired out their own time. The badges were meant, in part, to prevent runaways from blending into the urban slave population, because they would have found it difficult and dangerous to seek work or engage in other business on their own behalf without possessing a tag. Dwight adorned the eastern pillar with a Charleston “free tag,” which the city had required free blacks to wear for most of the 1780s, probably also to help prevent runaways from taking advantage of urban opportunities. Interestingly, the centerpiece of the free tag is a liberty or Phrygian cap, held aloft on a liberty pole, a symbol of the quest for freedom that made an occasional appearance during the era of the American Revolution but would become more common in the United States in the 1790s and after, it having been popularized in the French Revolution.33 The placement of the slave figures between these two badges hints at their liminal state between the strict regulations of slavery and the quest for full liberty" (see bibliographic citation).

"Until Emancipation, Detroit and the Detroit River community served as the gateway to freedom for thousands of African American people escaping enslavement. Detroit was one of the largest terminals of the Underground Railroad, a network of abolitionists aiding enslaved people seeking freedom. Detroit's Underground Railroad code name was Midnight. At first, Michigan was a destination for freedom seekers, but Canada became a safer sanctuary after slavery was abolished there in 1834. With passage of the Fugitive Slave Act in 1850, many runaways left their homes in Detroit and crossed the river to Canada to remain free. Some returned after Emancipation in 1863.

The successful operation of Detroit's Underground Railroad was due to the effort and cooperation of diverse groups of people, including people of African descent, Whites, and North American Indians. This legacy of freedom is a vital part of Detroit and its history."

Plaque on the back on the memorial:

With companion work Tower of Freedom in the Civic Esplande, Windsor, Ontario, Canada

A project of the Detroit 300 and the International Underground Railroad Monument Collaborative."