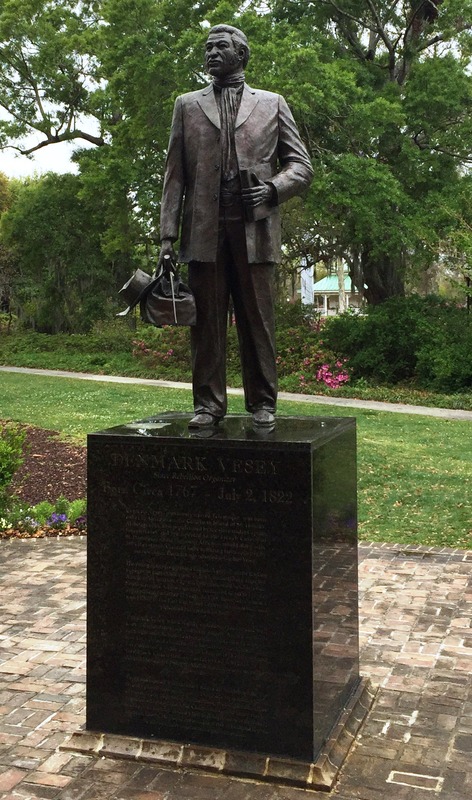 The work is dedicated to Denmark Vesey, a carpenter and self-educated black man who planned one of the most extensive slave revolt in U.S. history in Charleston, SC in 1822. Vesey, elegantly dressed in a collared jacket, trousers, and an exceedingly long and slim cravat, is shown holding his carpentry bag, his hat, and his Bible. The figure stands atop a massive granite pedestal that is inscribed on two sides with biographical and historical information about Vesey and his vital contributions to the fight for the emancipation of black people.

Denmark Vesey and the Spirit of Freedom Monument Committee and City of Charleston.

To watch a video of the the monument's dedication, click here.

Denmark Vesey, previously named Telemaque, was born either in Africa or on the Caribbean island of St. Thomas. At the age of 14, he was purchased by the slave trader Captain Joseph Vesey and transported to the French Colony of St. Domingue, where the young African was sold along with 389 other slaves. Claimed to be suffering from epilepsy by his new owner, Denmark was returned to Captain Vesey.

The young man accompanied Captain Vesey on many trading voyages as part of the crew. In 1873, immediately after the American Revolution, Captain Vesey relocated to Charleston, South Carolina, where Denmark continued to serve him for approximately another 17 years. In 1799, however, Denmark won $1,500 in the East Bay Street Lottery in Charleston and purchased his freedom for $600.

Denmark Vesey was a highly skilled carpenter and well known within free black and slave society. According to his contemporaries, he harbored frustration at his inability to legally free his wife and children. His antislavery sentiments may have received a wider audience when in 1818 enslaved and free black Charlestonians established a branch of the African Methodist Episcopal (AME) Church where he served as a church leader.

Vesey envisioned a community where all would be free , but recently planned state legislation of 1820 made legal emancipation of slaves nearly impossible. Furthermore, municipal authorities repeated attacks on the AME Church convinced Vesey slavery was such a violation of God's law that rebellion was necessary to obtain liberty. He placed his own life at risk as he dared to plan to recruit others to achieve the goal of freedom.

Inscription on back of black granite plinth:
Denmark Vesey

Vesey and his lieutenants "Gullah" Jack Pritchard, Peter Poyas, and Monday Gell developed a plan for a revolt, which may have involved thousands of followers. Their war of liberation was originally planned for July 14, 1822, and called for conspirators to seize weapons and set fires around the city. Once reinforced by rural slaves, as many as possible were to escape to Haiti where African people had already abolished slavery and formed an independent nation. According to Congregational minister and abolitionist Thomas Wentworth Higginson, the plan was "the most elaborate insurrectionary project ever formed by American slaves."

When two slaves informed the authorities of the plot, the conspirators tried to move the date to June 16, but their plan failed. Arrests and trials followed and beginning on July 2, 1822, two days before Independence Day, Vesey and 34 of his compatriots were hanged. This figure represents the greatest number of slave conspiracy-related executions in American history. 37 were banished, most outside the United States, and four whites were briefly fined and incarcerated for for sympathizing with the conspirators. To strenghten security, officials demolished the AME Church, and the state legislature imposed rigorous new laws, including the Negro Seaman Act subjecting free black sailors from outside the state to arrest when their ships docked in Carolina ports. Free black men were required to have white guardians, and those who left the state were barred from returning. By the mid-1820s, the city fortified itself with an arsenal and barracks. In 1842, the Military College of South Carolina, now known as the "The Citadel," was established on that same site.

Despite the daunting opposition, Vesey's Spirit and liberating vision did not die. He became an inspiring symbol of freedom for later abolitionists including David Walker, John Brown, Harriet Tubman, Frederick Douglass, and Harriet Beecher Stowe. His resolve demonstrates the timeless universality of men and women's desire for freedom and justice irrespective of race, creed, condition, or color.

Round sign on side of black granite plinth:
Charleston Stories
Hear Denmark Vesey here
Completing the Story:
Bringing a Community Together
www.charlestonstories.org
History calls back