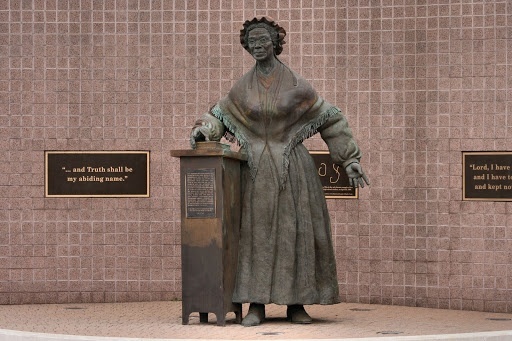 The monumental bronze figure of Sojourner Truth stands behind a concave wall, on an elevated semi-circular stage. She stands to the left of a lectern, her left arm outstretched at her side as she looks out at an imagined audience. She places her right hand on the book that rests atop the lectern. Truth is shown bespectacled, wearing a scalloped-edge bonnet, fringed shawl, and floor-length dress. A bronze plaque describing Truth’s life and accomplishments is affixed to the front of the lectern. The concave wall behind Truth is embellished with bronze plaques bearing quotes from Truth.

The bronze plaque on the lectern reads:

"This monument was dedicated by the people of Battle Creek, Michigan, on September 25, 1999. To preserve the image and honor of the legacy of Sojourner Truth (1797-1883), who lived in this area for the last 27 years of her life. Although she could neither read nor write, this charismatic ex-slave was empowered by a deep religious faith to carry her message of social reform and individual right across the country. Using humor, wit and song in her oratory, Sojourner Truth transformed national attitudes and institutions. The community inspired the vision of Truth which is embodied in this sculpture by internationally renowned artist Tina Allen. It is for each of us who stand here to carry on the work of Truth."

The plaque to the figure’s right reads:

“… And Truth shall be my abiding name.”

A plaque directly behind the figure bares Sojourner Truth’s signature and is inscribed:

“Because it was illegal to reach slaves, Sojourner Truth never learned to read or write. This is the only known example of her signature, which she wrote in an autograph book owned by Hattie Johnson, a local high school student, on April 23, 1880. (from the Archies of the Historical Society fo Battle Creek)”

A plaque to the figures left reads:

“Lord, I have done my duty and I have told the Truth and kept nothing back.”

A final bonze plaque from at the memorial reads:

"Sojourner Truth was born as the slave Isabella in New York State about 1797. As a child she spoke only low Dutch and, like most slaves, she never learned to read or write. While she was in bondage, she married Thomas, a fellow slave, and had five children. She was sold to four new owners before walking away to freedom in 1826. Isabella then settled in New York City until 1843, when she changed her name to Sojourner Truth. Relying on her deep religious faith, she was determined to travel the land as a itinerant preacher, speaking the truth and fighting against injustice. She became a prominent figure in several national social reform movements, working for the abolition of slavery, women’s rights, temperance, prison reform and the rights of former slaves. Sojourner first came to Battle Creek in 1856 to speak to the Quaker Friends of Human Progress. She moved to the area a year later and lived here for the last twenty-six years of her life. She died on November 26, 1883, and is buried in Oak Hill Cemetery. Sojourner Truth was perhaps the most famous African American woman in 19th century America. For over forty years she was a passionate advocate for the dispossessed, using her quick wit and fearless tongue to fight for human rights. May her legacy live on."