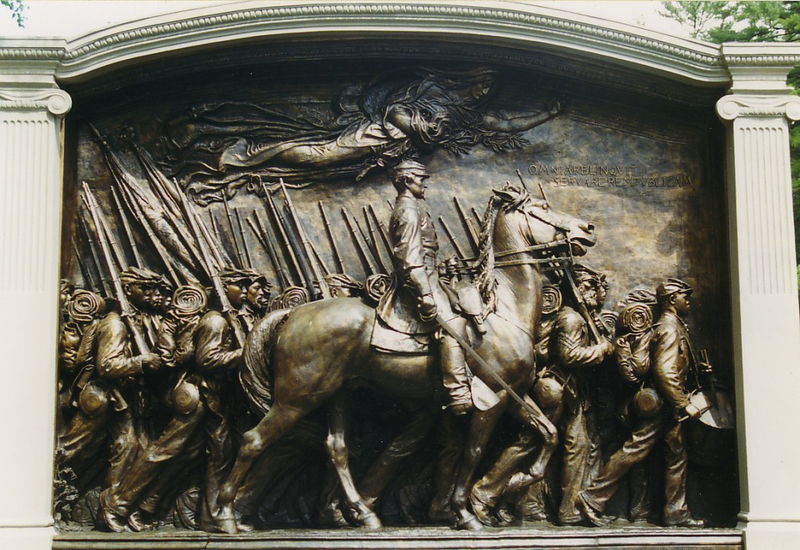 The work commemorates members of the 54th Volunteer Infantry, the first documented African American regiment to be formed during the Civil War. Colonel Shaw, the regiment’s leader, is shown on horseback with three rows of infantrymen marching behind him. This scene depicts the 54th Regiment marching down Beacon Street in Boston on May 28, 1863, as they left Boston to head for the battles that wages in the South.

A plaster cast version, which was exhibited at the 1901 Pan-American Exposition, is now housed at the National Gallery of Art, on loan by the Saint-Gaudens National Historic Site, Cornish, New Hampshire.

Inscription on the relief:

Servare Rempvblicam [He left behind everything to save the Republic]

Right in the van of the red rampart's slippery

Swell with heart that beat a charge he fell


Forward as fits a man: but the high soul burns

On to light men's feet where death for noble//ends makes dying sweet.

A Charles W. Eliot quote on the back of the monument:

The White Officers taking life and honor in their hands cast in their lot with men of a despised race unproven in war and risked death as inciters of servile insurrection if taken prisoners besides encountering all the common perils of camp march and battle. The Black rank and file volunteered when disaster clouded the Union Cause. Served without pay for eighteen months till given that of white troops. Faced threatened enslavement if captured. Were brave in action. Patient under heavy and dangerous labors. And cheerful amid hardships and privations. Together they gave to the Nation and the World undying proof that Americans of African descent possess the pride, courage and devotion of the patriot soldier. One hundred and eighty thousand such Americans enlisted under the Union Flag in MDCCCLXIII-MDCCCLXV"