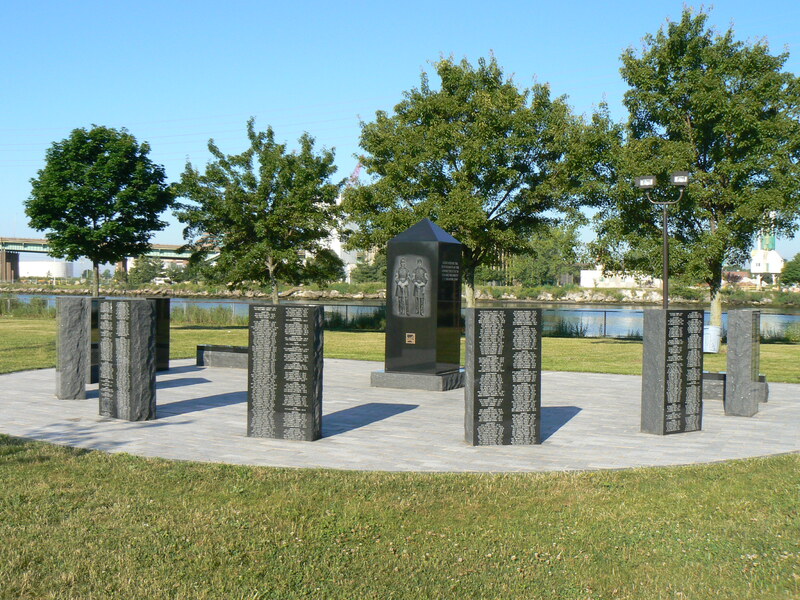 The memorial features a black stone obelisk, partially encircled by eight stone markers featuring the names of the members of the 29th Colored Regiments. The obelisk itself includes images and/or texts on all four sides. The Westside features a bronze plaque with a relief depicting soldiers carrying the flag of the 29th Regiment and the United States. The plaque also includes the unit’s dates of engagement and the names of those killed in battle or who died of disease. The Southside provides a detailed history of the unit. The Eastside includes etched images of Alexander H. Newton and Daniel S. Lathrop, the two members who achieved the unit’s highest rank of sergeant major. The Northside includes work’s dedicatory information.

The History of the Connecticut 29th Colored Regiment

West face of the obelisk inscription:

South face of the obelisk inscription:

Most of the men came to the regiment for training at a place called Grapevine Point now called Criscuolo Park. This part is located at East Chapel Street and James Street.

The 29th Connecticut Infantry was organized at Fair Haven and mustered in on 8 March 1864. On this date, the regiment was formally mustered into the service of the United States. On March 4th LT. Colonel William B. Wooster, Formerly of the 20th Connecticut Volunteers assumed command of the regiment. On March 19th, the regiment formed in line, and after the presentation of a flag by the Colored Ladies of New Haven, marched on board the transport “Warrior”. On March 10th, the regiment sailed out of the New Harbor and disembarked an Annapolis, Maryland. Serice Moved from Beaufort, SC to Bermuda Humored VA 8-13 August 1864, siege operations against Petersburg and Richmond 13 August 1864 to 2 April 1864."

North face of the obelisk inscription:

"Dedicated By the Descendants of the Connecticut 29th Colored Regiment C.V. Infantry 2008"