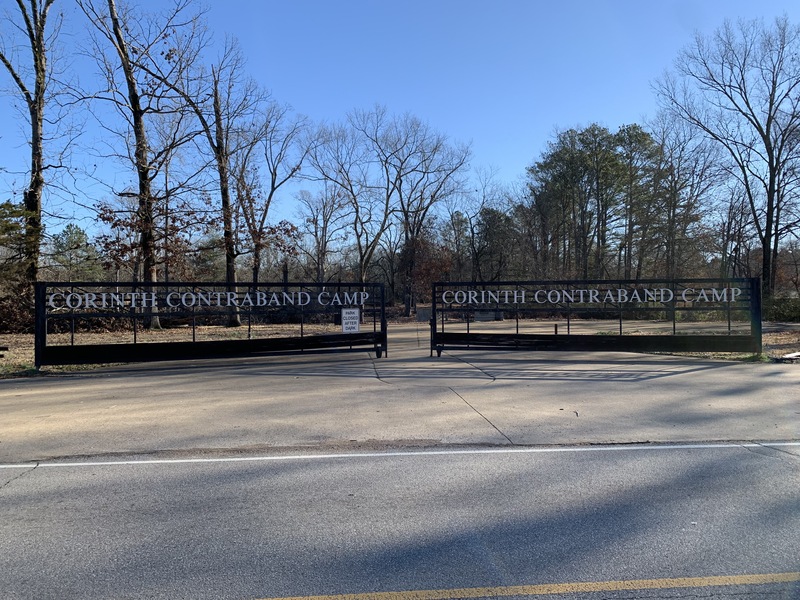 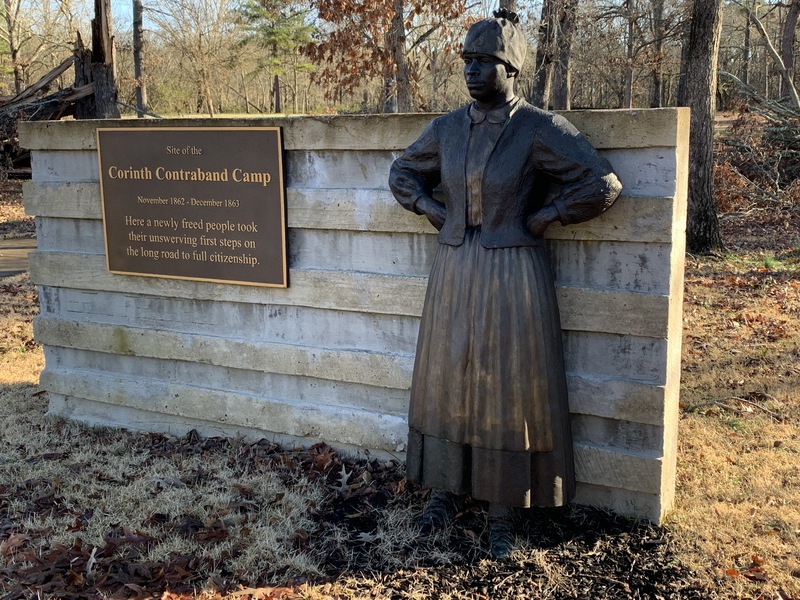 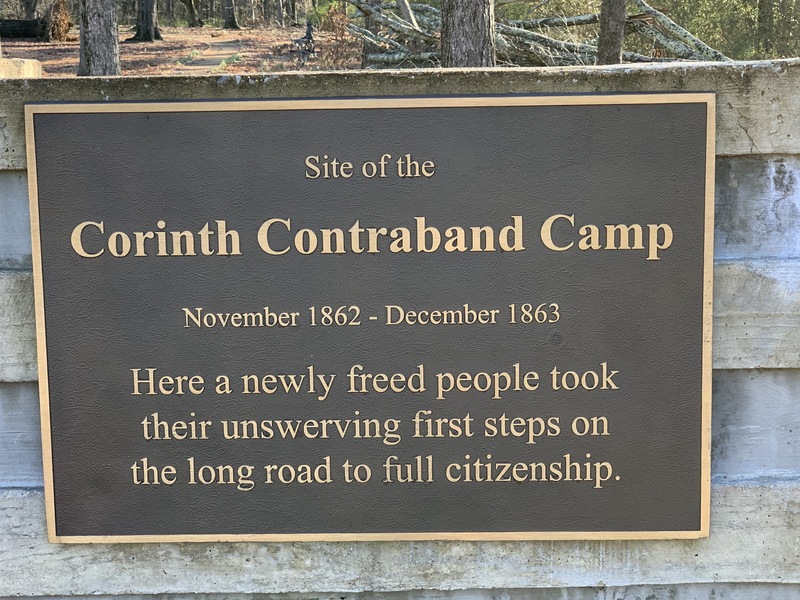 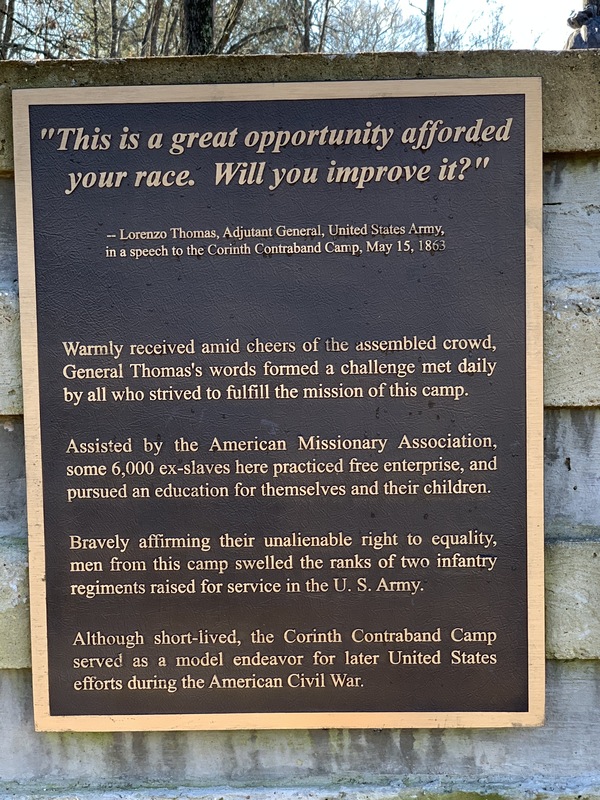 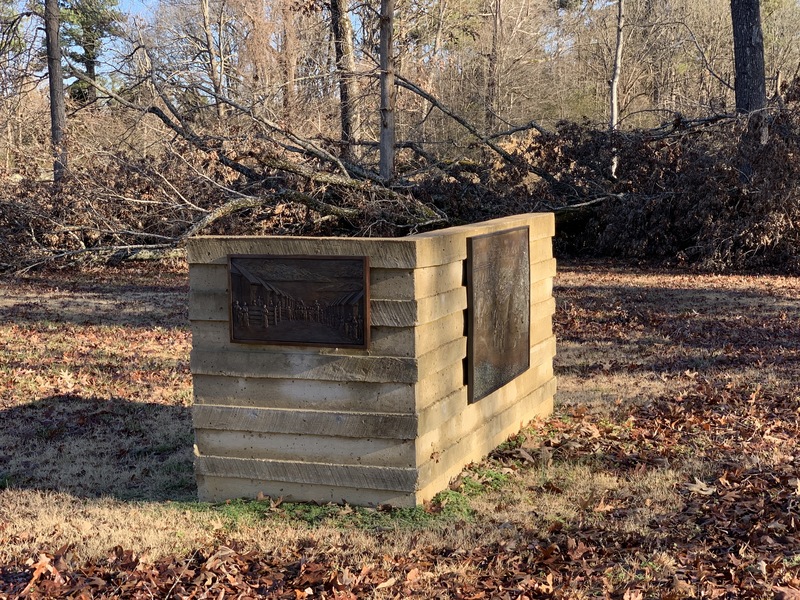 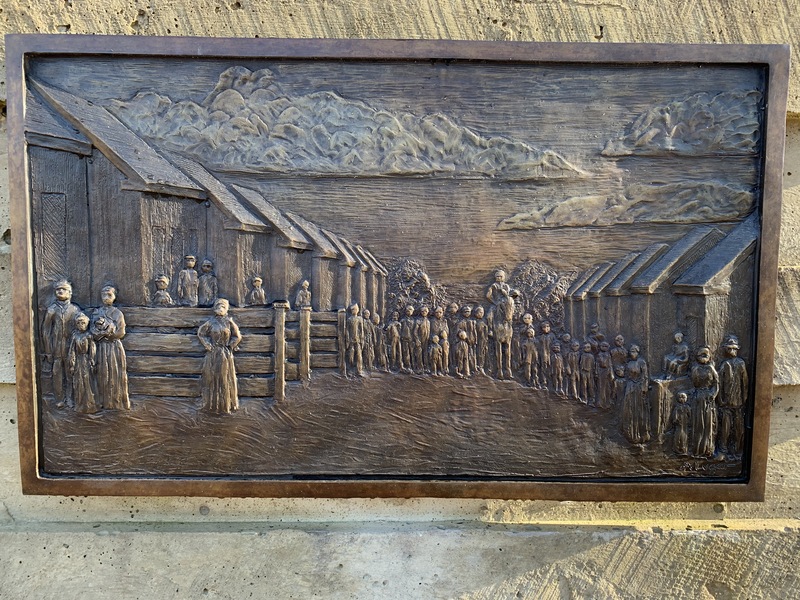 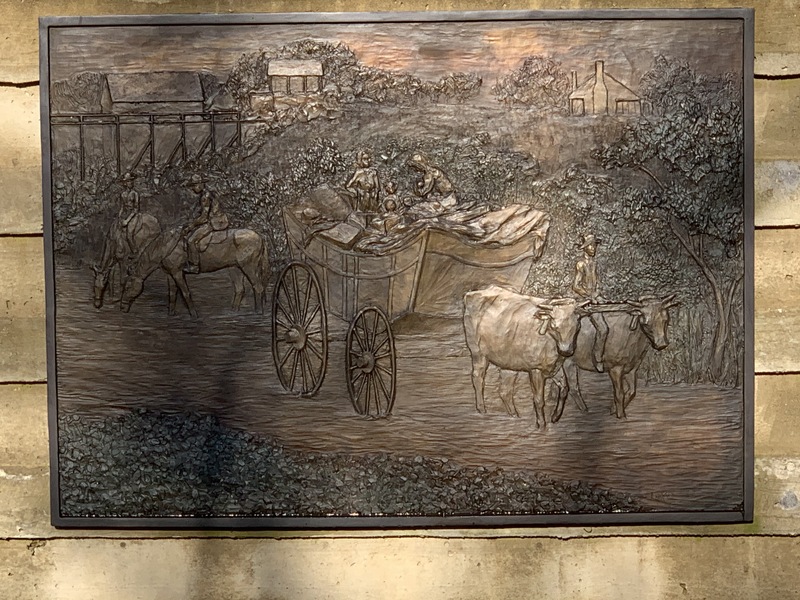 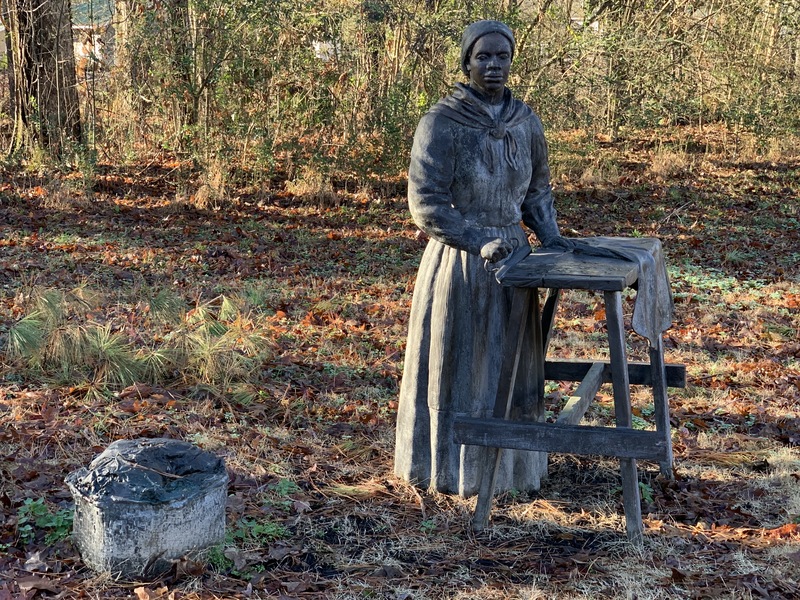 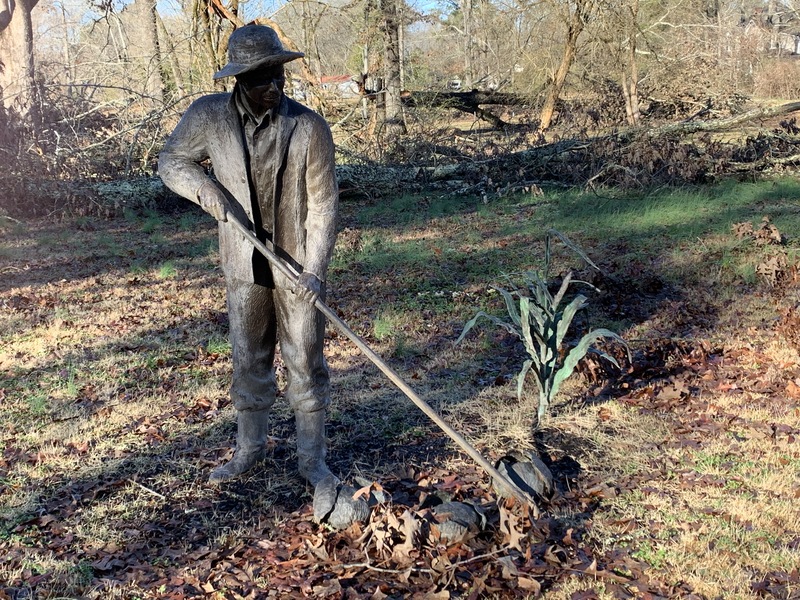 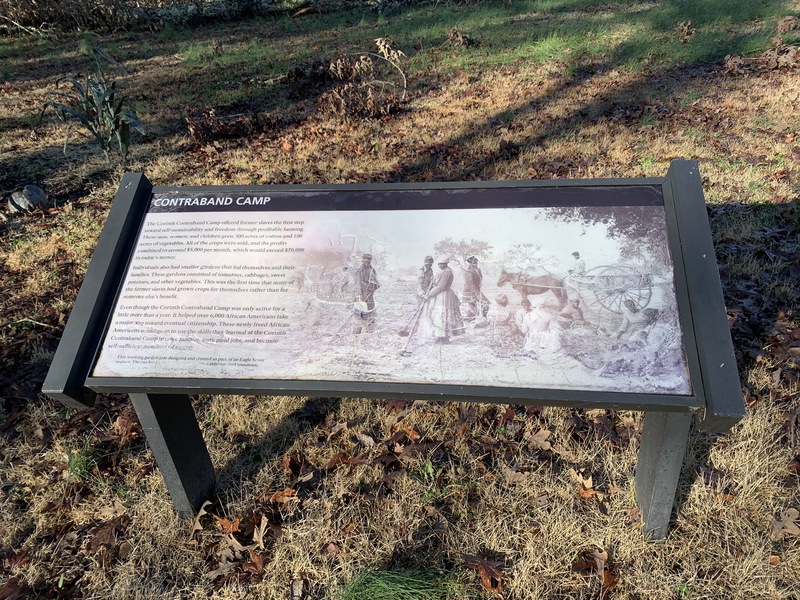 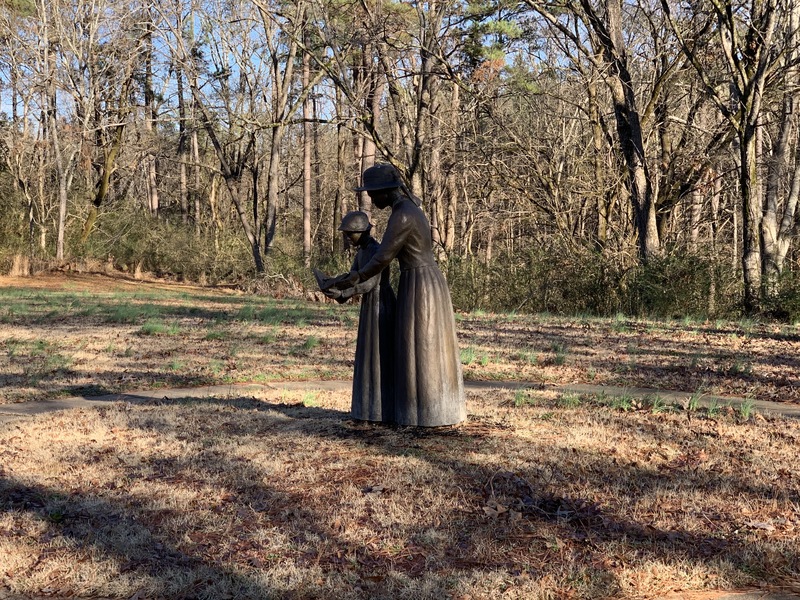 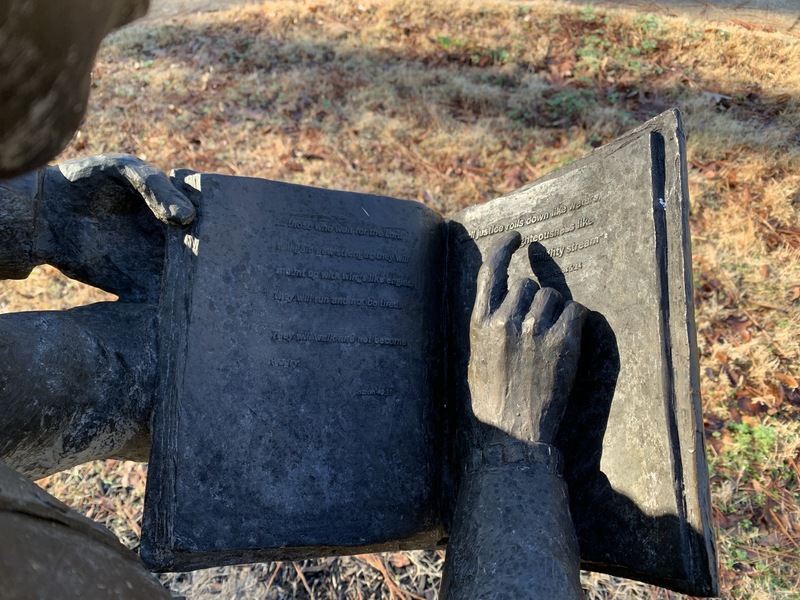 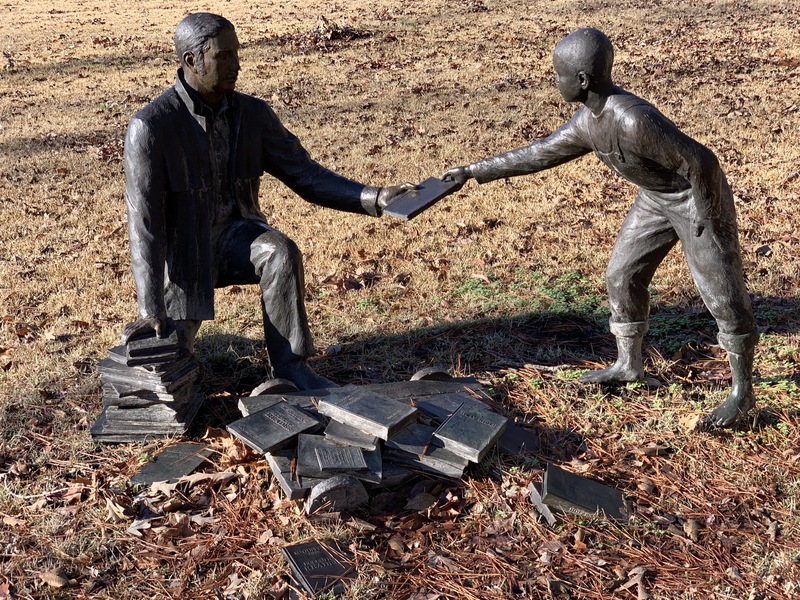 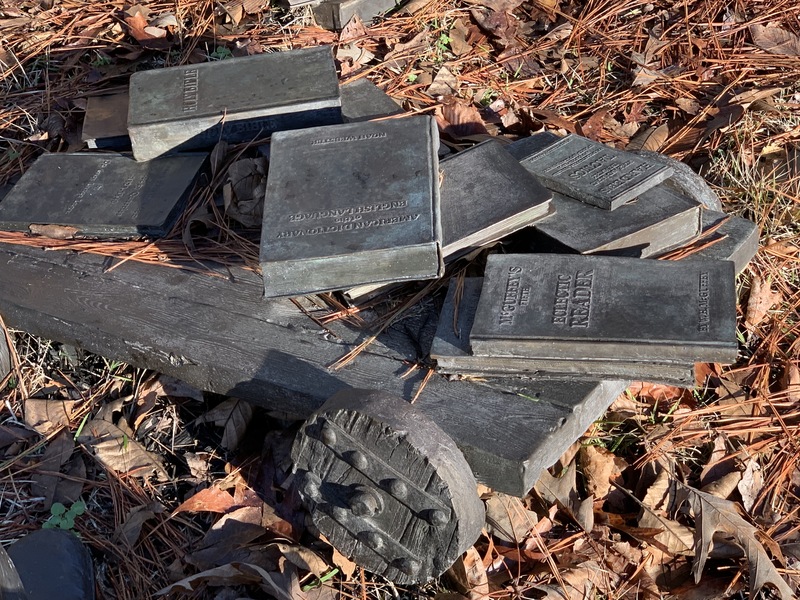 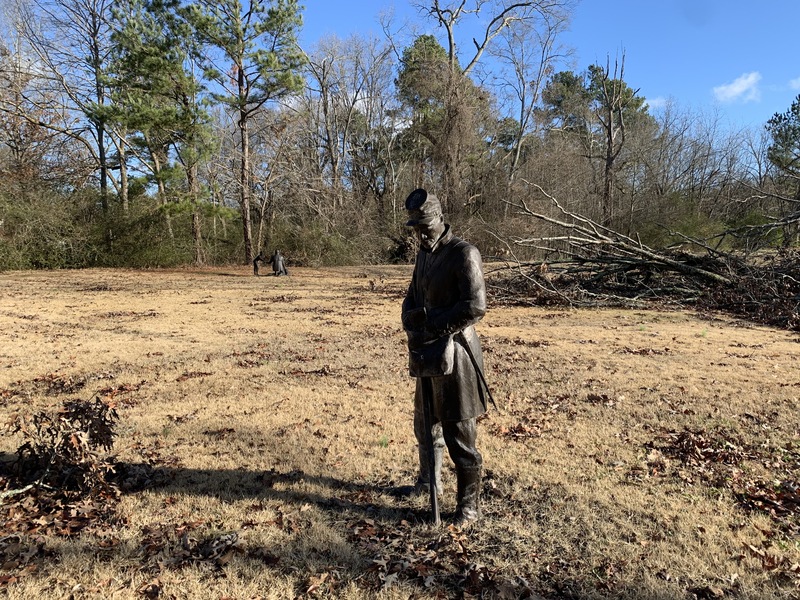 Eight life-size bronze statues (in six groupings) commemorate the formerly enslaved persons who escaped from the South and sought safety and freedom behind Union lines at the Corinth Contraband Camp in Corinth, Mississippi. Established by Union General Grenville M. Dodge in 1862 to shelter freedom-seekers, the Corinth Contraband Camp featured a church, a school, a hospital, and numerous homes as well as productive and profitable farms that were operated by freedmen and women. The bronze statues include: a woman with her hands on her hips, “the greeter”; a laundress ironing clothes; a farmer tending to his crops with a hoe; a female teacher with a young female student who read together from an open Bible; a man and boy gathering books; and a member of the United States Colored Troops who pulls Hardee's Rifle and Light Infantry Tactics from his haversack . Included at the site: two bronze plaques with inscriptions attached to a concrete wall near the greeter; two bronze low reliefs on a concrete wall opposite the greeter; and an informational panel explaining farming at the site in front of the farmer.

Inscription on bronze plaque at entrance:
“This is a great opportunity afforded your race. Will you improve it?” — Lorenzo Thomas, Adjutant General, United States Army, in a speech to the Corinth Contraband Camp, May 15, 1863

Warmly received amid cheers of the assembled crowd, General Thomas’s words formed a challenge met daily by all who arrived to fulfill the mission of this camp.

Assisted by the American Missionary Association, some 6,000 ex-slaves here practiced free enterprise and pursued an education for themselves and their children.

Bravely affirming their unalienable right to equality. Men from this camp swelled the ranks of two infantry regiments raised for services in the U.S. Army.

Although short-lived, the Corinth Contraband Camp served as a model endeavor for later United States efforts during the American Civil War.

The Corinth Contraband Camp offered former slaves the first step toward self-sustainbility and freedom through profitable farming. These men, women, and children grew 300 acres of cotton and 100 acres of vegetables. All of the crops were sold, and the profits combined to about $5,000 per month, which would exceed $70,000 in today's money.

Individuals also had smaller gardens that fed themselves and their families. These gardens consisted of tomatoes, cabbages, sweet potatoes, and other vegetables. This was the first time that many of the former slaves had grown crops for themselves rather than for someone else's benefit.

This working garden was designed and created as part of an Eagle Scout project. (The rest of the text has weathered away.)