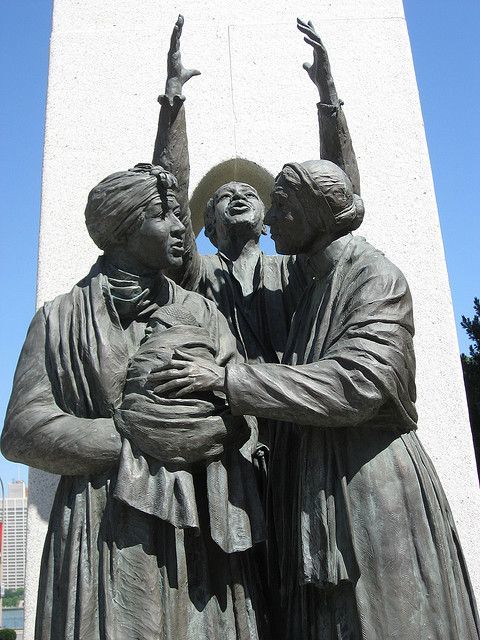 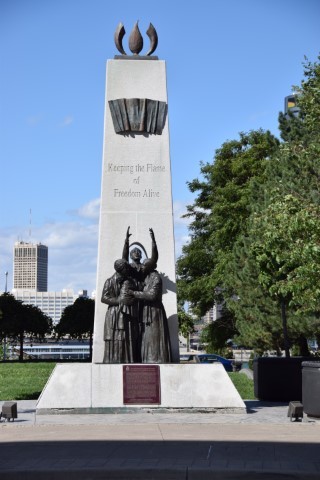 The Canadian counter-part to Ed Dwight's Gateway to Freedom, Tower of Freedom consists of a twenty-two-foot high granite tower, adorned with a bronze flame symbolizing the “Eternal Flame of Freedom.” Life-size bronze figures stand on opposite sides of the tower’s base. The cluster of four bronze figures facing the river include an African American woman holding an infant and a white woman, often identified as a Quaker “operative.” Behind the women, a man stands with his arms raised in a gesture of praise. On the opposite side of the tower, a singular figure of a woman looks back towards the river and the United States. Despite her age, she clutches a rag doll.

From the early 19th century until the American Civil War, settlements along the Detroit and Niagara rivers were important terminals for the Underground Railroad. White and black abolitionists formed a heroic network dedicated to helping free and enslaved African Americans find freedom from oppression. By 1861, some 30,000 freedom-seekers resided in what is now Ontario, after secretly traveling north from slave states like Kentucky and Virginia. Some returned south after the outbreak of the Civil War, but many remained helping to forge the modern Canadian identity.

Inscription on the river-facing side of the monument:

“Keeping the Flame of Freedom Alive”

Inscription on the reserve of the monument:

The second Bronze plaque just in front of the memorial:

"Tower of Freedom By Ed Dwight Dedicated October 20, 2001, With companion work Gateway to Freedom In Hart Plaza, Detroit. A project of Detroit 300 and the Underground Railroad Monument Committee of Windsor."