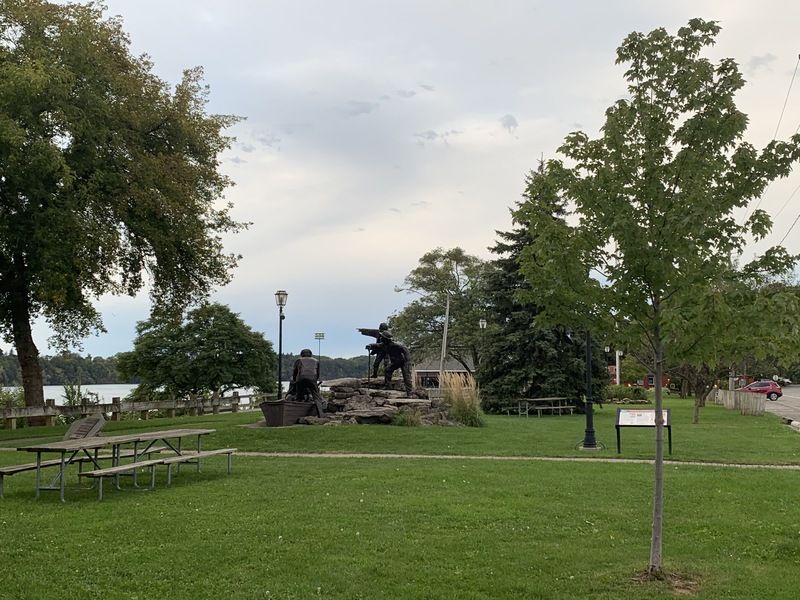 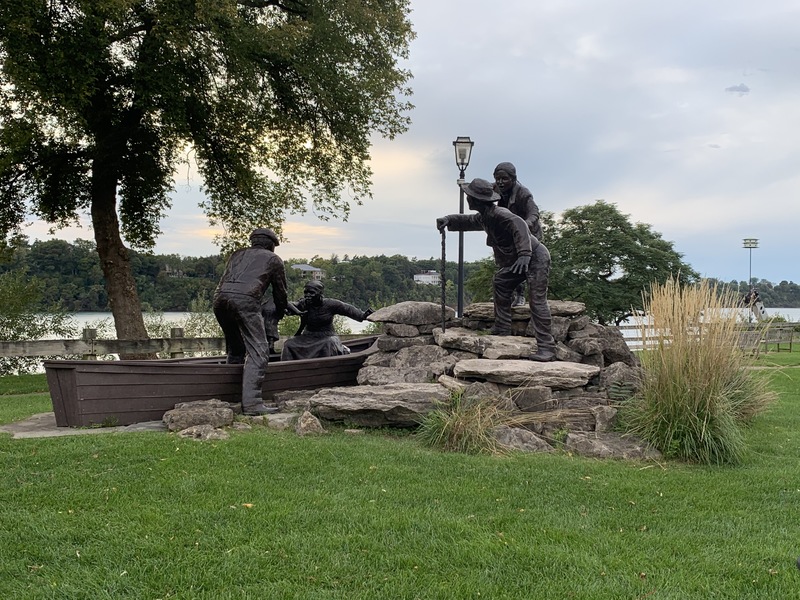 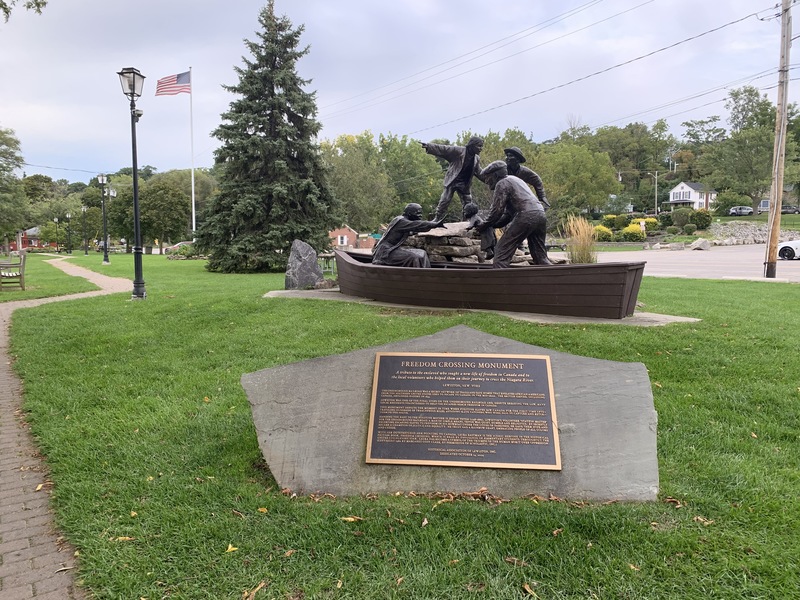 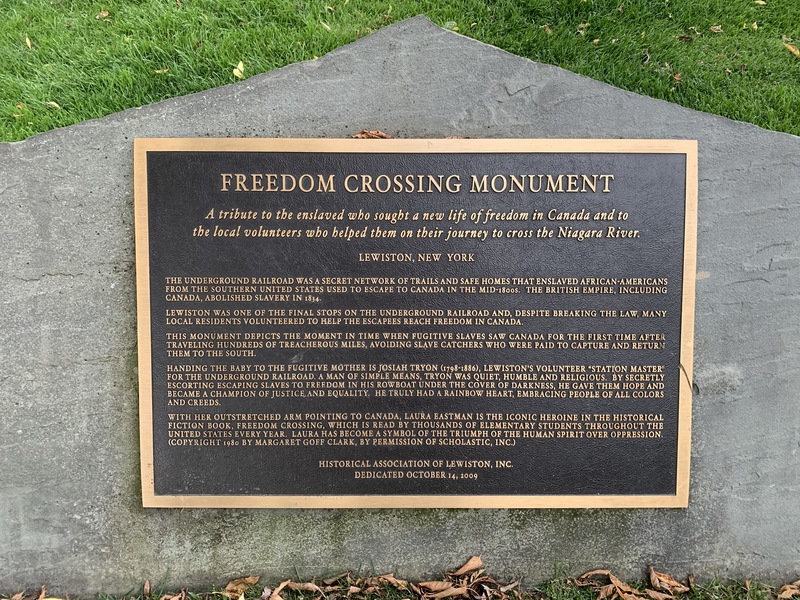 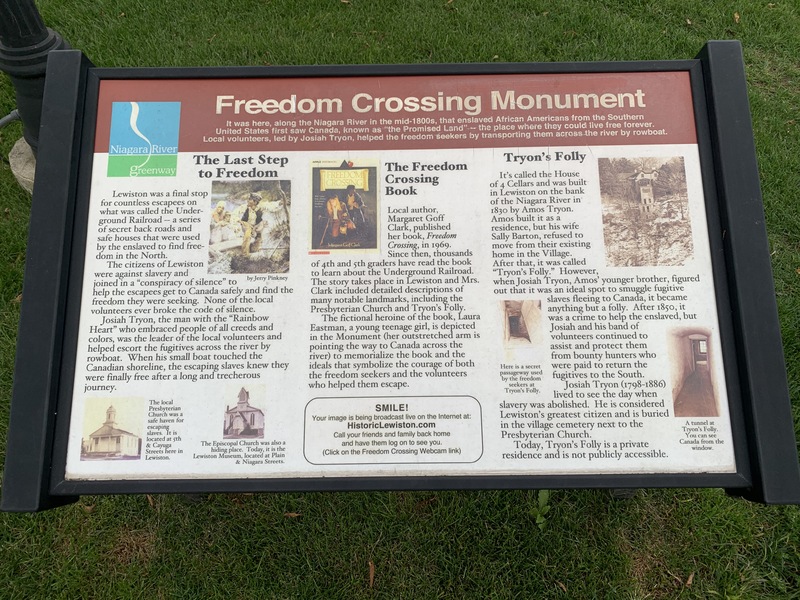 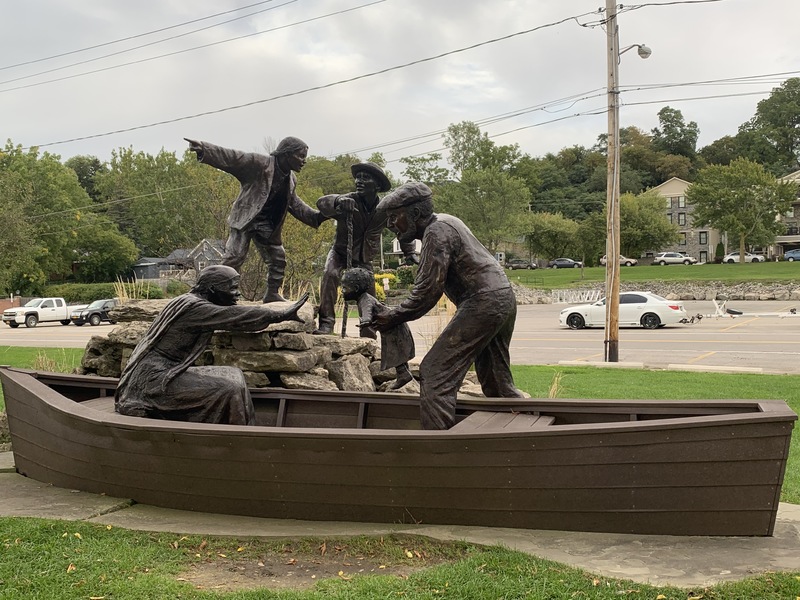 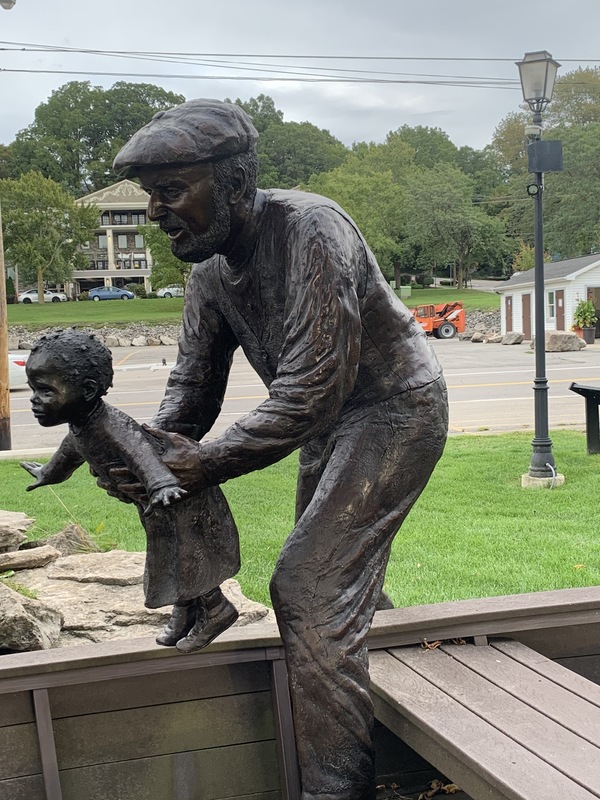 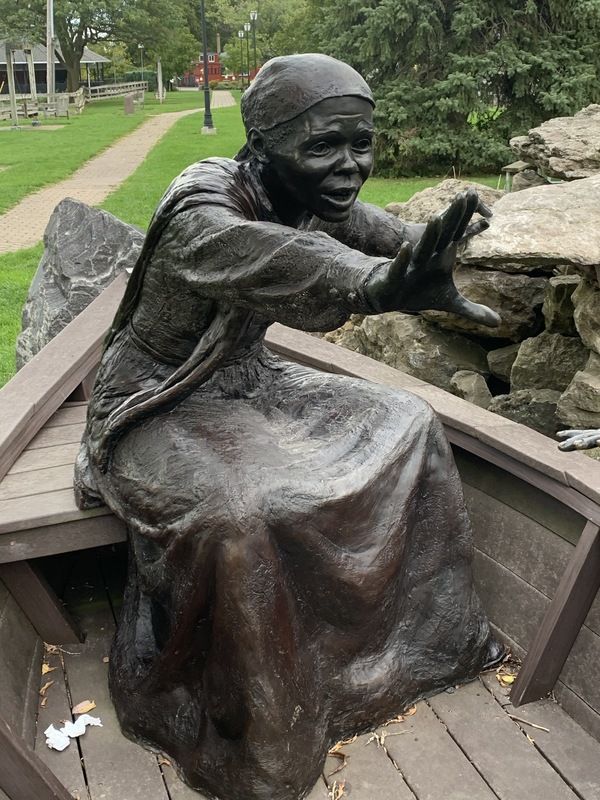 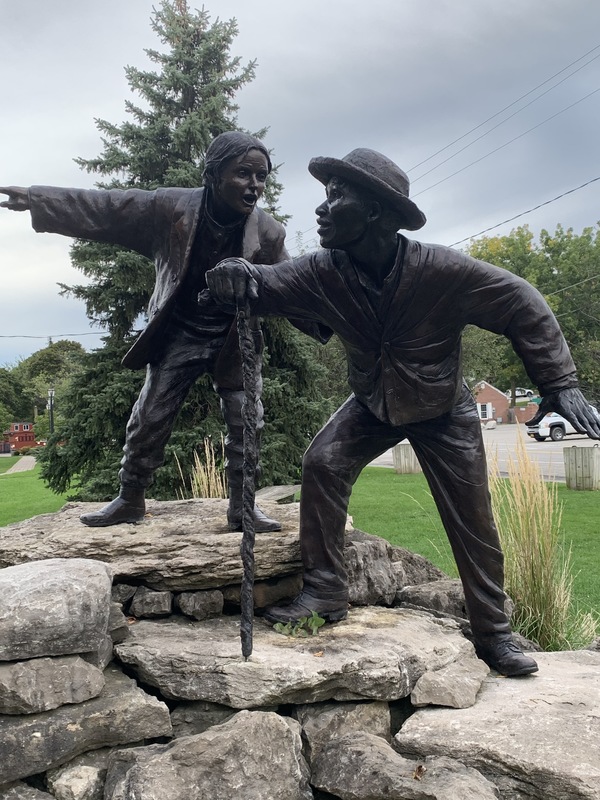 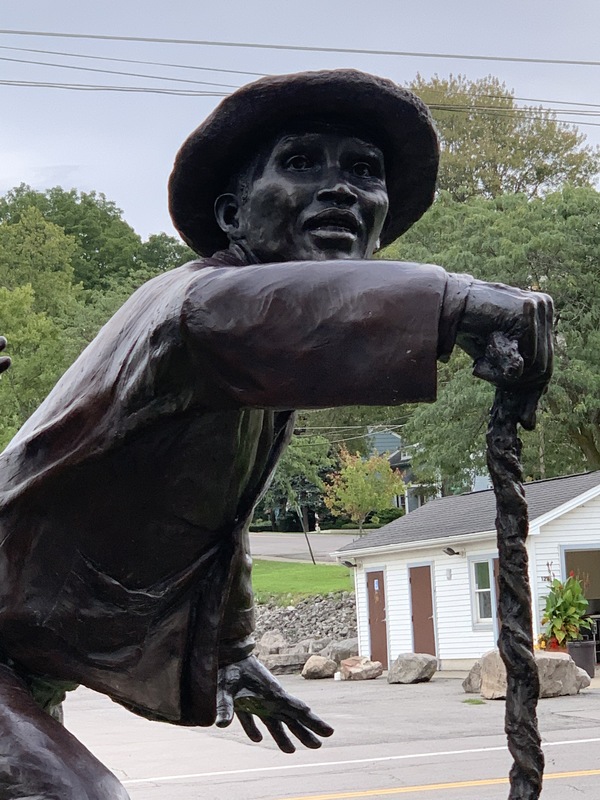 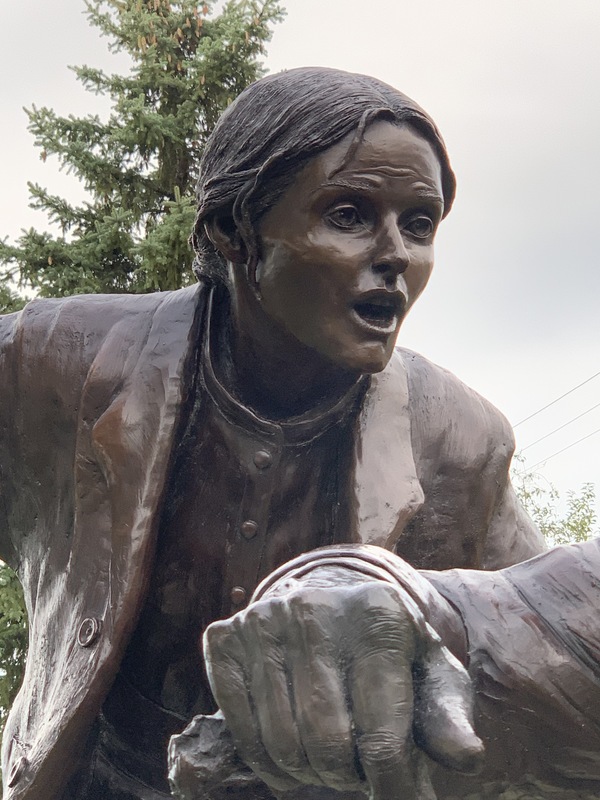 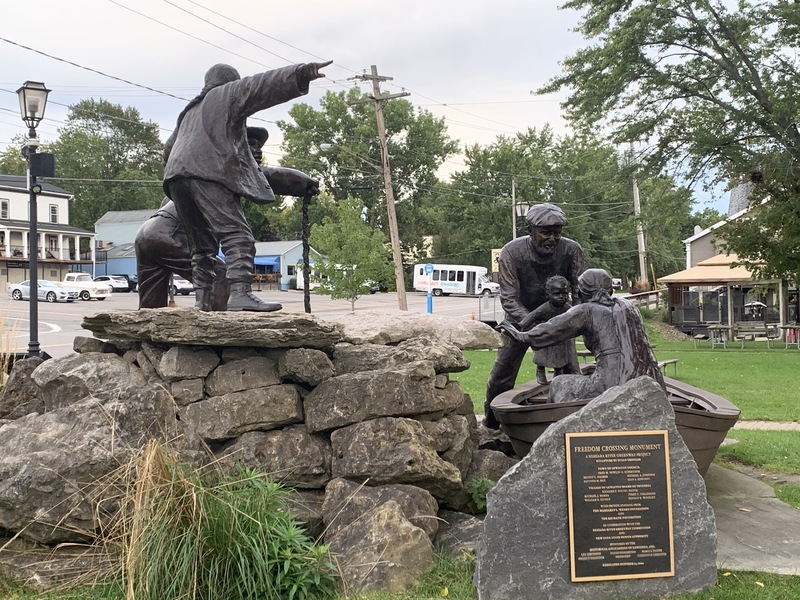 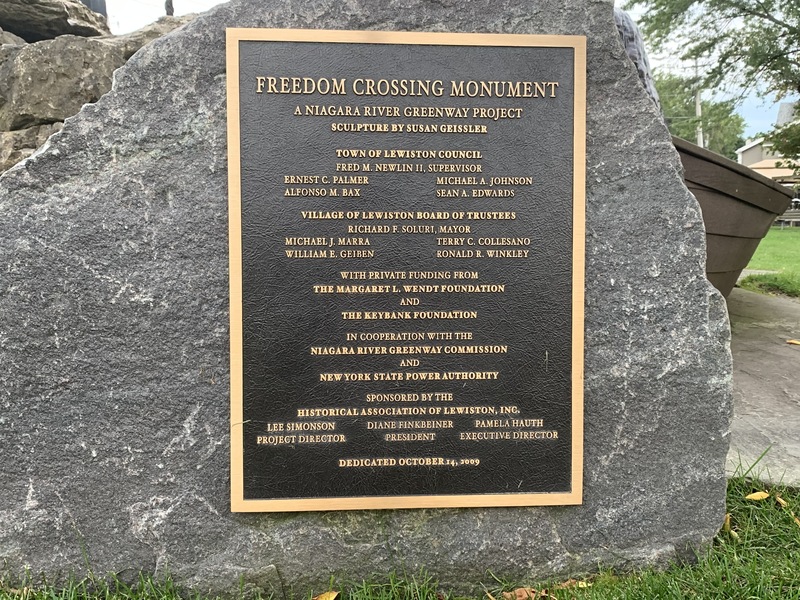 The monument consists of five bronze sculptures. The subjects are a family of freedom seekers including a father, mother and baby; Lewiston's Underground Railroad Station Master, Josiah Tryon; and the fictional heroine, Laura Eastman, from the Freedom Crossing book. A rowboat is at the center of the composition with teh mother seated in the boat as Tryon hands her the baby. Two figureds stand on rock meant to suggest the banks of the lower Niagara River.

A tribute to the enslaved who sought a new life of freedom in Canada and to the local volunteers who helped them on their journey to cross the Niagara River.

The Underground Railroad was a secret network of trails and safe homes that enslaved Africian-Americans from the southern United States used to escape to Canada in the 1800's. The British Empire, including Canada, abolished slavery in 1834.

Lewiston was one of the final stops on the Underground Railroad and despite breaking the law, many local residents volunteered to help the escapees reach freedom in Canada.

This monument depicts the moment in time when fugitive slaves saw Canada for the first time after traveling hundreds of treacherous miles, avoiding slave catchers who were paid to capture and return them to the south.

Handing the baby to the fugitive mother is Josiah Tryon (1798-1886) Lewiston's volunteer "Station Master" for the Underground Railroad. A man of simple means, Tyron was quiet, humble and religious. By secretly escorting escaping slaves to freedom in his row boat under the cover of darkness, he gave them hope and became a champion of justice and equality. He truly had a rainbow heart, embracing people of all colors and creeds.

With her outstretched arm pointing to Canada, Laura Eastman is the iconic heroine in the historical fiction book, Freedom Crossing, which is read by thousands of elementary students throughout the United States every year. Laura has become a symbol of the triumph of the human spirit over oppression. (Copyright 1986 by Margaret Goff Clark, by permission of Scholastic, Inc.)