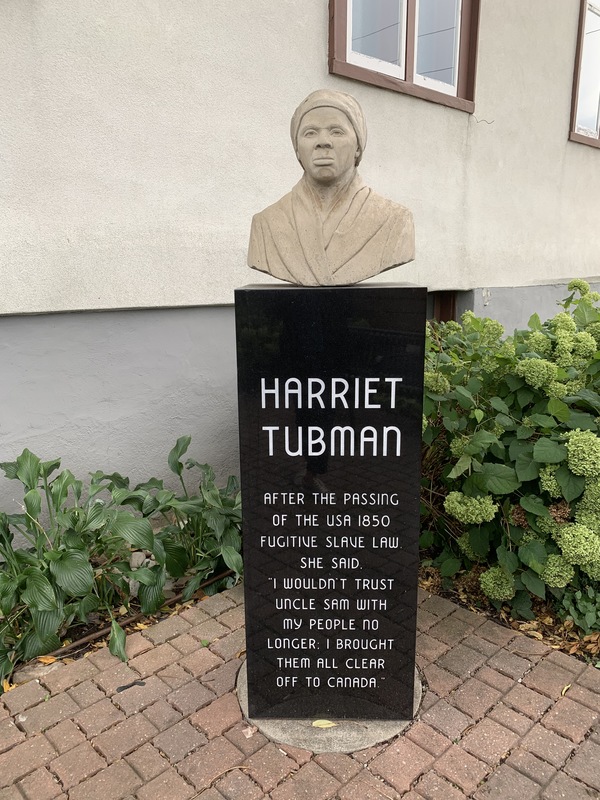 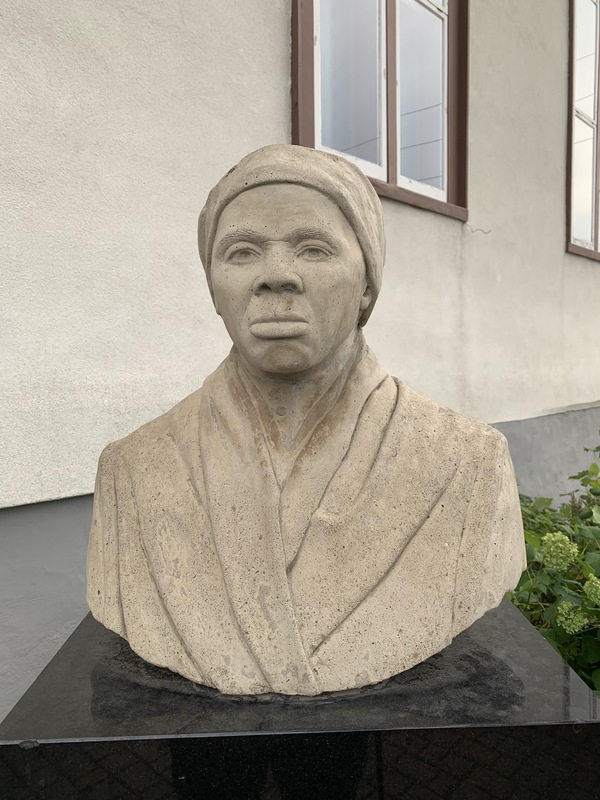 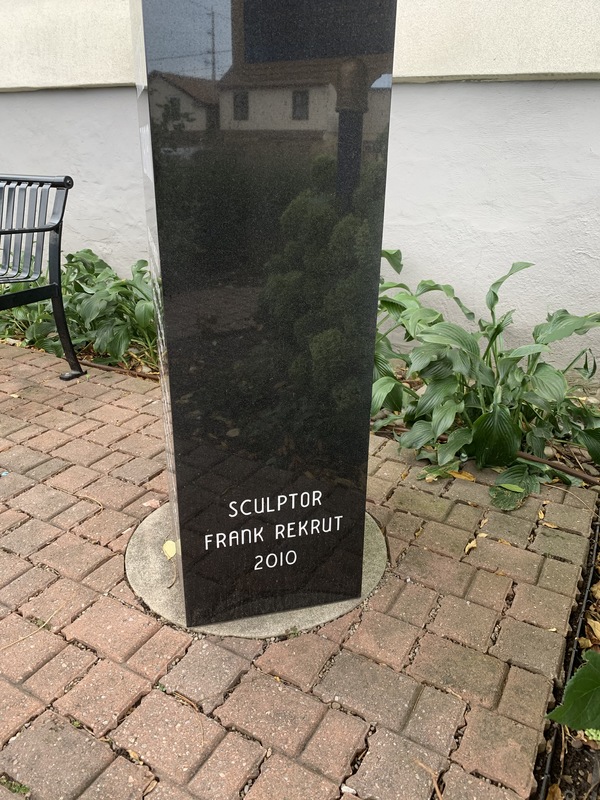 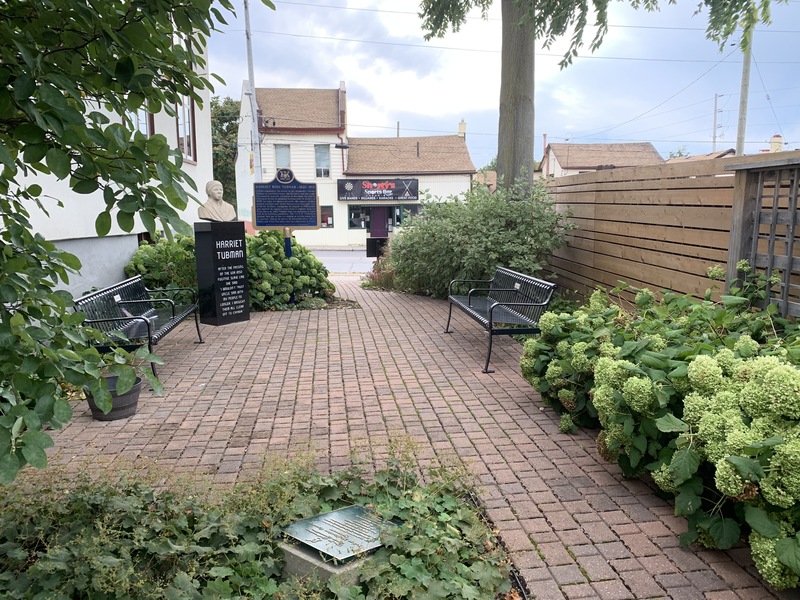 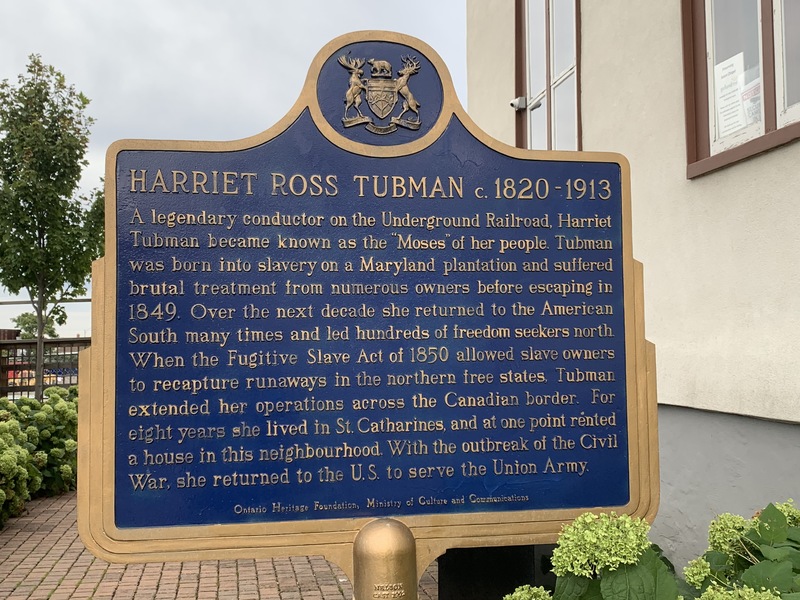 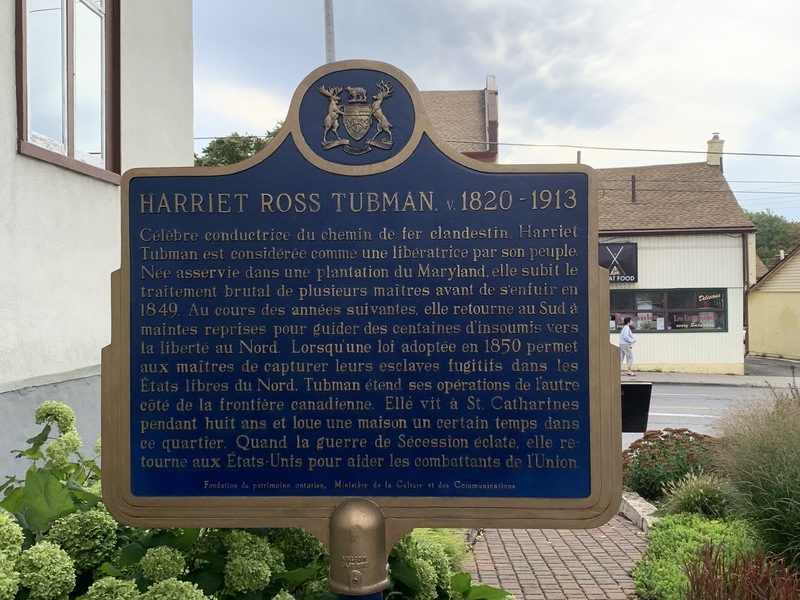 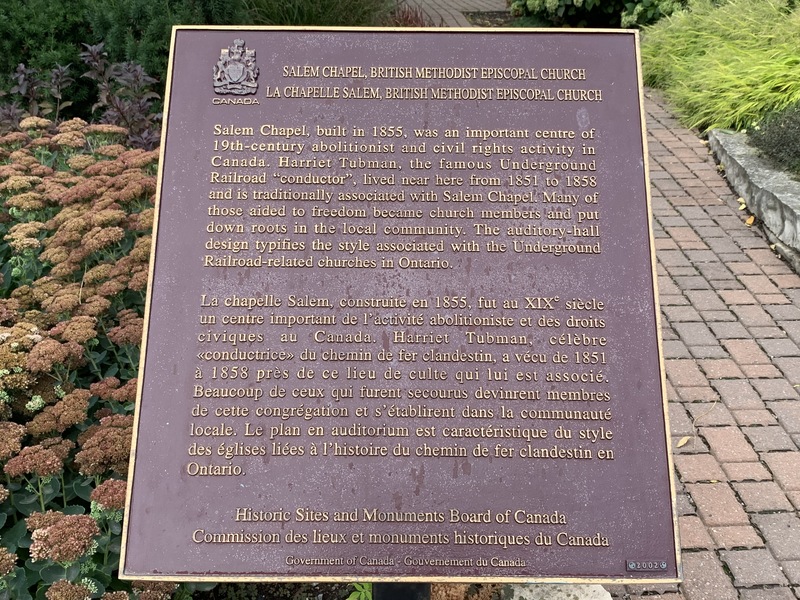 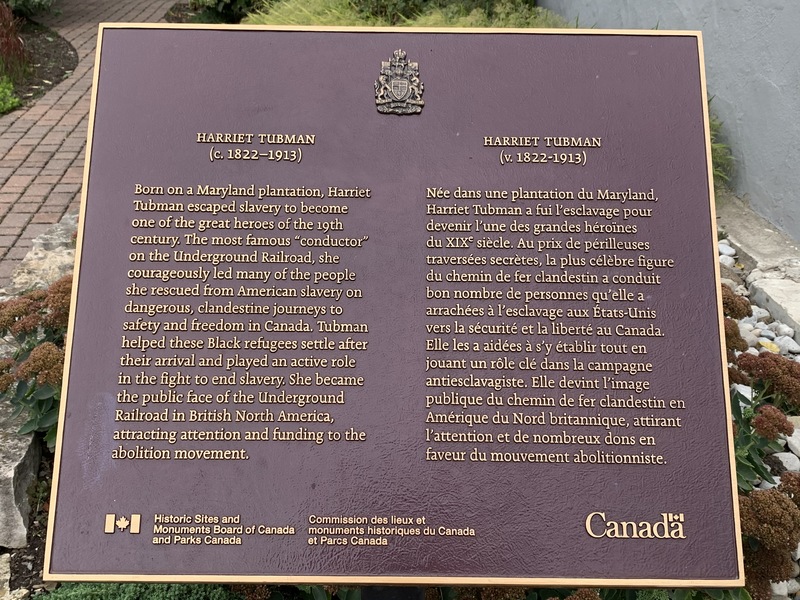 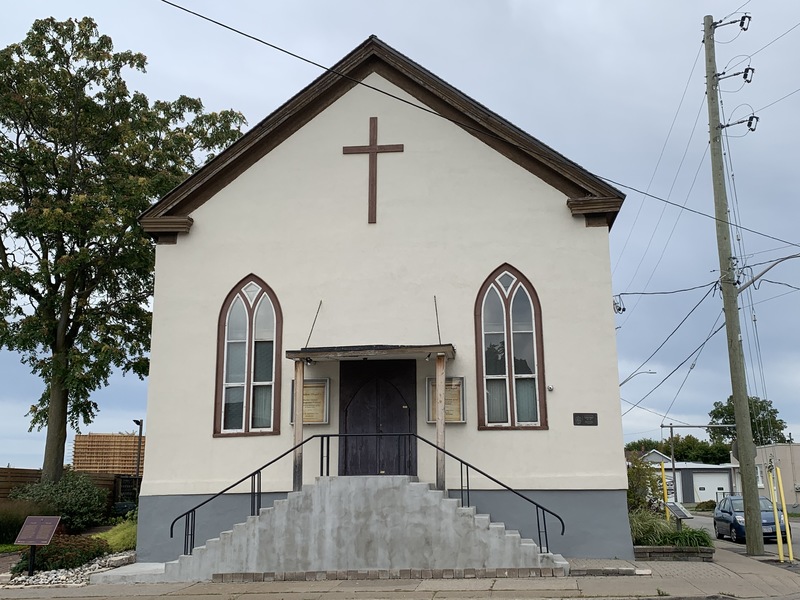 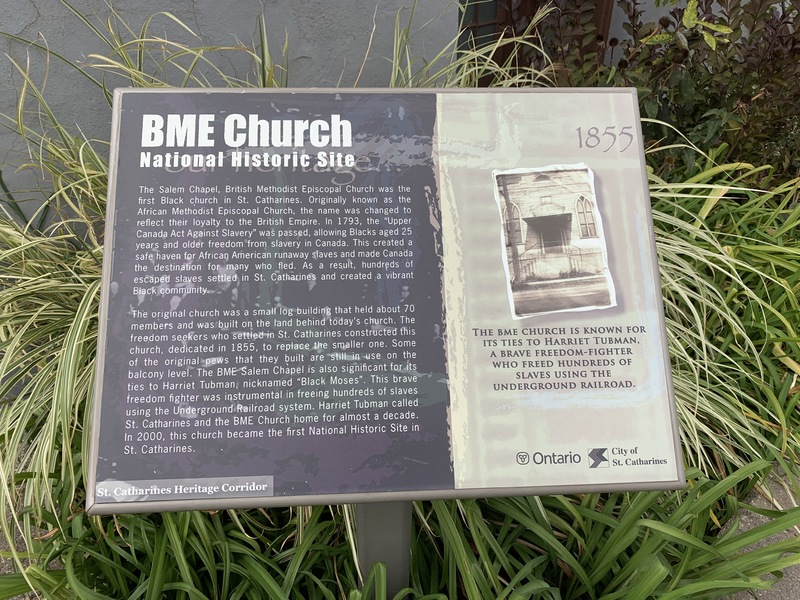 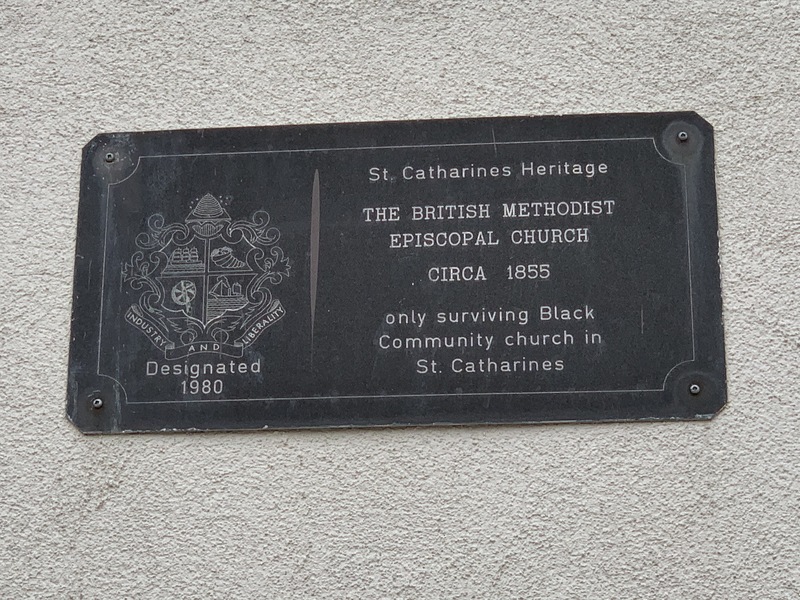 Half bust portrait of Harriet Tubman situated in a meditation garden next to British Methodist Episcopal Church of Canada-Salem Chapel, St. Catharines, Ontario.

Inscription on front of black marble plinth:
"After the passing of the USA 1850 Fugitive Slave Law, she said. 'I wouldn't trust Uncle Sam with my people no longer. I brought them all clear off to Canada.'"

Inscription on back of black marble plinth:
Sculptor
Frank Rekrut
2010

Ontario Heritage Foundation historic marker:
Harriet Ross Tubman c. 1820-1913
A legendary conductor on the Underground Railroad, Harriet Tubman became known as the "Moses" of her people. Tubman was born into slavery on a Maryland plantation and suffered brutal treatment from numerous owners before escaping in 1849. Over the next decade she returned to the American South many times and led hundreds of freedom seekers north. When the Fugitive Slave Act of 1850 allowed slave owners  to recapture runaways in the northern free states. Tubman extended her operations across the Canadian border. For eight years she lived in St. Catharines, and at some point rented a house in this neighborhood. With the outbreak of the Civil War, she return to the U. S. to serve the Union Army.

Historic Sites and Monuments Board of Canada marker about Salem Chapel:
Salem Chapel, built in 1855, was an important centre of 19th-century abolitionist and civil rights activity in Canada. Harriet Tubman, the famous Underground Railroad "conductor," lived here from 1851 to 1858  and is traditionally associated with Salem Chapel. Many of those aided to freedom became church members and put down roots in the local community. The auditory-hall design typifies the style associated with the Underground Railroad-related churches in Ontario.

Historic Sites and Monuments Board of Canada
Government of Canada

[In French as well]

Born on a Maryland plantation, Harriet Tubman escaped slavery to become one of the great heroes of the 19th century. The famous "conductor" on the Undergroun Railroad, she courageously led many of the people she rescued from American slavery on dangerous, clandestine journeys to safety and freedom in Canada. Tubman helped these Black refugees settle after their arrival and played an active role in the fight to end slavery. She became the public face of the Underground Railroad in British North America, attracting attention and funding to the abolition movement.

Historic Sites and Monuments Board of Canada and Parks Canada

[In French as well]

BME Church National Historic Site information panel:
The Salem Chapel, British Methodist Episcopal Church was the first Black church in St. Catharines. Originally known as the African Methodist Episcopalian Church, the name was changed to reflect their loyality to the British Empire. In 1793, the "Upper Canada Act Against Slavery" was passed, allowing Blacks aged 25 years and older freedom from slavery in Canada. This created a safe haven for African American runaway slaves and made Canada the destination for many who fled. As a result, hundreds of escaped slaves settled in St. Catharines and created a vibrant Black community.

The original church was a small log building that held about 70 members and was built on the land behind today's church. The freedom seekers who settled in St. Catharines constructed this church, dedicated in 1855, to replace the smaller one. Some of the original pews that they built are still in use in the balcony level. The BME Salem Chapel is also signficant for its ties to Harriet Tubman, nicked name "Black Moses." This brave freedom fighter was instrumental in freeing hundreds of slaves using the Underground Railroad system. Harriet Tubman called St. Catharines and the BME Church home for amost a decade. In 2000, this church became the first National Historic Site in St. Catharines.

*****
1855
The BMA church is known for its ties to Harriet Tubman, a brave freedom-fighter who freed hundreds of slaves using the Underground Railroad.