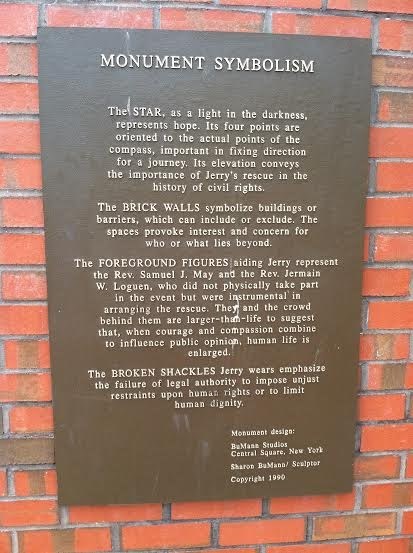 A concrete four-pointed star serves as the sculpture’s plinth. Three brick and concrete walls form a niche, which viewers are invited to physically occupy. Affixed to the brick walls, the niche contains bronze plaques explaining the history of Jerry Henry’s rescue and the symbolism of the sculpture. Emerging from the central brick wall, on the side that faces outward, away from the architectural niche, are three life-size bronze figures. Rendered in high relief, the artist, BuMann, depicts an imagined scene of Jerry’s rescue. A shirtless Henry, with broken shackles on his wrists, is helped to safety with the assistance of Rev. Samuel J. May and the Rev. Jermain W. Loguen (who was himself a formerly enslaved person), men who were not actually present during Jerry’s escape.

To learn more about Jerry Henry's rescue, checkout "The Jerry Rescue and Its Aftermath," a digital exhibition curated by the Special Collections Research Center of Syracuse University.

Inscription on the central bronze plaque:

In 1827, The State of New York was among the first in the Union to abolish slavery. By the mid-1800’s, Syracuse was known nationally as a hub of ant-slavery activity. Harriet Tubman, Gerrit Smith, the Rev. Samuel J. May, and the Rev. Jermain W. Loguen lived in the area and played historic roles helping escaped slaves reach freedom and safety in the northern United States and Canada. They organized and maintained the secret routes and hiding places known as the Underground Railroad.

Their Abolitionist sentiments were shared by many men and women in the community. When Congress passed the Fugitive Slave law in 1850, a local Vigilance Committee publicly called on people everywhere to oppose it. Then-Mayor Alfred H. Honey was one of the community leaders who denounced the law as 'a most flagrant outrage upon the inalienable rights of man.'

With the attention of the nation focused on the acts of civil disobedience this position might spark, the great American orator Daniel Webster, came to Syracuse and delivered a dramatic address from the balcony overlooking City Hall. He warned the supporters of the Vigilance Committee of the dire legal consequences they faced in opposing the Fugitive Slave Law.

Meanwhile, William 'Jerry' Henry had escaped from slavery in Missouri, and was working as a cabinet maker and cooper in Syracuse. At noon on October 1st, 1851, he was apprehended, taken before the local U.S. Commissioner, and charged as a fugitive slave. Alerted, the Vigilance Committee sprang into action. At first, disorganized attempt to free Jerry that afternoon failed. But, later that evening, a mob of outraged citizens, both black and white, stormed the jail across Clinton Street from this site, and rescued him. Jerry was hidden in the city for a few days, then spirited north along the Underground Railroad to Kingston, Ontario.

Twenty-seven people, including Loguen and eleven other black citizens, were indicted for their involvement. Enoch Reed, a black man, was the only person convicted of any crime related to the rescue; it was a minor offense, and he died before his case could be heard on appeal.

For many years afterwards, Abolitionists from all over the north gathered in Syracuse on October 1st, to celebrate Jerry's rescue."

The STAR, as a light in the darkness, represents hope. Its four points are oriented to the actual points of the compass, important in fixing direction for a journey. Its elevation conveys the importance of Jerry’s recuse in the history of civil rights.

The BRICK WALLS symbolize buildings or barriers, which can include or exclude. The spaces provoke interest and concern for who or what lies beyond.

The FOREGROUND FIGURES aiding Jerry represent the Rev. Samuel J. May and the Rev. Jermain W. Loguen, who did not physically take part in the event but were instrumental in arranging the rescue. They and the crowd behind them are larger-than-life to suggest that, when courage and compassion combine to influence public opinion, human life is enlarged.

The BROKEN SHACKLES Jerry wears emphasize the failure of legal authority to impose unjust restraints upon human rights or to limit human dignity.