Step on Board, Boston 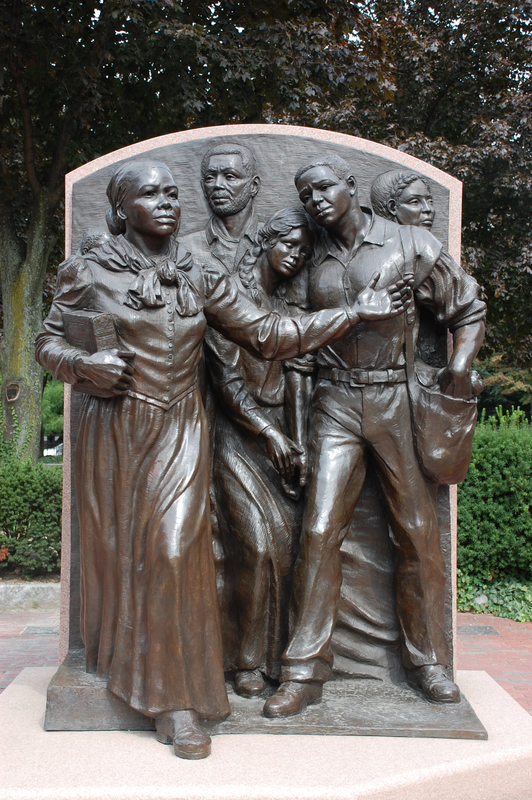 Harriet Tubman had enduring ties to Boston. Once she began her rescue missions on the Underground Railroad, she became well known in abolitionist circles. She had an established relationship with Frederick Douglass and was acquaintances with William Lloyd Garrison, Franklin Sanborn, and Thomas Higginson, all who lived or worked in the environs of Boston. At well-attended public gatherings in the city, she described her escape trips in vivid and captivating language. In 1861 she spent the winter in New England and met Massachusetts Governor John Andrew. He arranged for Tubman to travel to Beaufort, South Carolina, to join the Union Army as nurse, cook, scout, and spy. During the American Civil War, Bostonians kept abreast of Tubman’s deeds through the reporting of Sanborn for the Boston Commonwealth.[1]

From 1880s to the early 1900s, Tubman often visited Boston for events related to the women and civil rights movement. In 1896, for example, she was the main speaker at the National Association of Colored Women’s first national meeting in Boston. She attended the opening reception in Boston in 1905 of the Harriet Tubman Christian Temperance Union at Parker Memorial Hall. And in 1906, a group of progressive African American women established a settlement house in her name, the Harriet Tubman House on Holyoke Street in the South End. Now the United South End Settlements, the organization's mission is to strengthen families and build community.[2]

In the early 1990s, the United South End Settlements pushed for recognition of the Underground Railroad hero for both her abolitionist and suffrage activities in the city. In 1996, the Harriet Tubman Memorial Committee formed with representatives from the Museum of Fine Arts, Museum of the National Center of Afro-American Artists, the Boston Parks and Recreation Department, Boston Public Schools, the Open Space Land Trust, neighborhood groups, and local churches. The monument was funded through several agencies including the New England Foundation for the Arts, the George B. Henderson Foundation, the Edward Ingersoll Browne Fund, the Boston Arts Commission, the Boston Parks and Recreation Department, and the City of Boston.[3]

Step on Board is the first statue on city-owned property to honor a woman in Boston. The multi-figure statue is located at the edge of Harriet Tubman Square at Columbus Avenue and Pembroke Street in Boston’s South End. A local Boston artist, Fern Cunningham was awarded the commission in 1998 and created the 10-foot bronze in high relief that depicts Harriet Tubman with five runaway slaves; a granite map on the reverse of the monument traces the Underground Railroad.[4]

[3] Commemorative Program for the Unveiling of Emancipation by Meta Vaux Warrick Fuller and Step on Board by Fern Cunningham, Sunday, June 20, 1999, Harriet Tubman Square, Boston, Massachusetts.