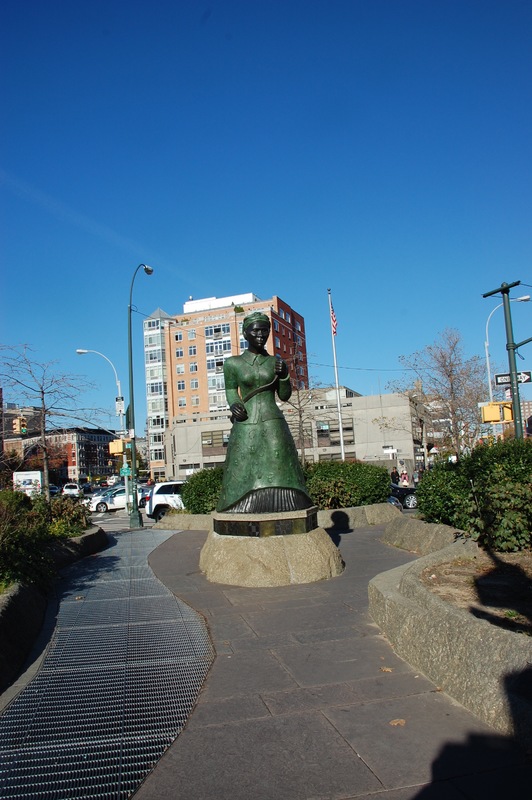 No monument goes unnoticed. Monuments in public spaces always generate responses, sometimes negative, sometimes outright controversy over site location and artistic vision. Before the dedication of Swing Low, a resident posted a question on “Uptown Flavor,” a Wordpress site dedicated to “Your Harlem Lifestyle.” The question asked: “Does anyone have an explanation as to why the statue of Harriet Tubman located at the Harriet Tubman Memorial Plaza is facing toward the South and not the North?”[1]

What ensued were responses filled with confusion and disappointment at the orientation of the monument. The New York Times also reported on the community’s distress of the south-facing statue: “Jacob Morris, director of the non-profit Harlem Historical Society, said neighbors were so upset about the south-facing statue that there is a petition with 1,000 signatures calling for the city to reverse her field of vision. ‘We are serious,’ he said. ‘We hate what they did. It is just an outrage.’”[2]

In a 2014 interview with Percent for Art, Alison Saar responded to the criticism with the following: “She’s [Tubman is] best known for her sojourns north, but what is most impressive to me are her trips south, where she risked her own freedom.” Saar continued: “As impressive as her courage and commitment was, what is amazing to me is her compassion. Harriet Tubman is calling on all of us to look at the compassion within each of us.”[3]

The artist further explained the orientation of her statue: “I intentionally had her facing south.  I really wanted to use her story as a call to others to reach out and participate in a similar way in terms of being compassionate and doing volunteer work. The community largely saw it as the figure not facing the direction of The Underground Railroad, which was north-bound. But for Harriet Tubman it was a two-way street; going back and forth, and that’s how I wanted to remember her. People kept demanding that she be turned around. What was nice about all of that was that it really opened up a dialogue with the surrounding community.”[4]

The comments reveal the way in which individuals and communities understand historical persons in specific ways. In this case, the desire to see Tubman steaming northward in the landscape of Harlem was of utmost importance for some residents. They knew their version of the story of Tubman, and wanted the statue to be reoriented. Saar’s explanations just were not sufficient for them, particularly her articulation that the statue should provoke compassion and volunteerism. The re-engineering of the plaza with the subway running beneath it and the narrowness of the plaza had much to do with Saar’s and the landscape architect’s design. Yet, no one seemed to discuss with the public the limitations of the site, leaving the community angry and confused.