Reclaiming the Space of Historic Heritage 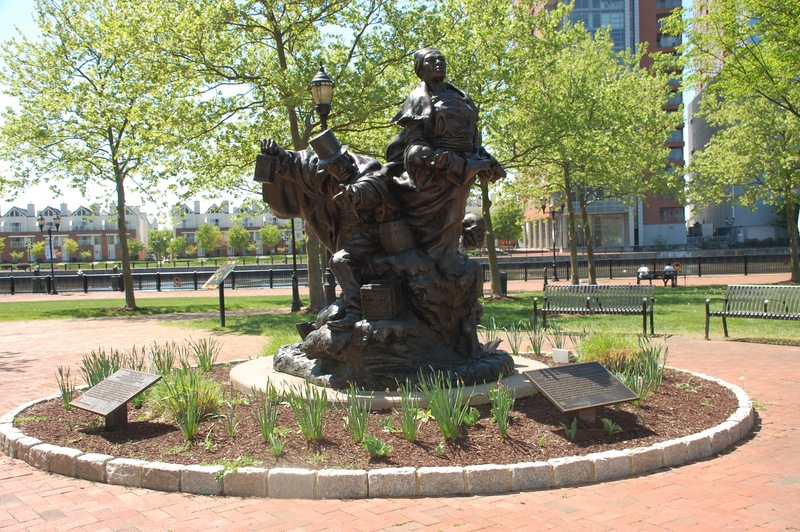 Mario Chiodo’s Unwavering Courage in the Pursuit of Freedom resides within the boundaries of the Tubman-Garrett Riverfront Park, a major reclamation project for the City of Wilmington. The statue also plays a part in the city’s understanding of its place within the broader history of slavery and the Underground Railroad in Delaware.

In 1995, local officials, business leaders, and residents in Wilmington began efforts to revitalize its riverfront. Throughout the 1800s and early 1900s the Christina River and the waterfront were the center of vital local industries including leather tanneries and ship building. In addition, the Philadelphia, Baltimore, and Washington Railroad had two round houses located along the river. “Gradually, and with cooperation of many groups and individuals, the banks of the Christina River transformed from an abandoned and neglected industrial brownfield to a popular destination for dining, shopping, entertainment, business, recreation, and residential living.”[1]

In 1998-99, the Riverfront Development Corporation of Delaware completed the Tubman-Garrett Riverfront Park, which is “adjacent to the Market Street Bridge where slaves were transported to freedom. . . . the park was designed in the amphitheater style to complement the architecture of the [nearby] train station district in the early 1900s by the renowned Philadelphia architect Frank Furness.”[2] The city proudly recognized Wilmington as a major station on the Underground Railroad through the creation of the park and the commissioning of an artist to create a monument to Harriet Tubman and Thomas Garrett.

Tubman-Garrett Riverfront Park also serves as a stop along the Harriet Tubman Underground Railroad Byway in Delaware, designated a historical route in 2010. The byway stretches 98 miles in length from the Maryland border at Sandtown to the Delaware/Pennsylvania border and allows travelers a chance to visit historic sites associated with the Underground Railroad. Chiodo’s Unwavering Courage in the Pursuit of Freedom is now considered one of the visual anchors along this cultural heritage corridor.